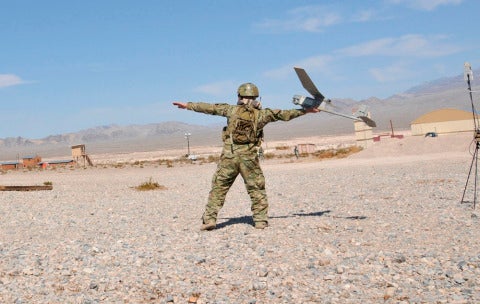 AeroVironment has secured a contract to continue deliveries of its RQ-11B Raven small unmanned aircraft system (SUAS), along with new Mantis i23 gimbaled payloads and initial spares packages to the US Army.

Forming part of the not-to-exceed $65.8m contract, the latest $13.8m award is scheduled to be funded through the army’s fiscal 2012 procurement budget.

Initial $15.8m and $16.4m contracts were secured by the company in June and September 2012 respectively.

"Like all our customers, the army’s needs continue to evolve, and we continue to deliver enhanced solutions to ensure that our troops maintain their battlefield advantage," Minson added.

“The army’s needs continue to evolve."

Weighing 4.5lb, the RQ-11B Raven is a lightweight SUAS designed for rapid deployment and high mobility for military operations, such as low-altitude intelligence, surveillance, and reconnaissance (ISR) and target acquisition missions at ranges up to 10km in the battlefield.

Mantis i23 is a ruggedised, multi-axis payload designed to improve Raven’s target tracking capability by enabling a greater level of visual fidelity and continuous observation of an item of interest irrespective of the air vehicle’s flight direction.

The payload is capable of delivering daytime and night time capabilities from a single package, through replacement of two separate sensor payloads on the Raven air vehicle.

Deliveries are scheduled to complete by July 2013.