Verdict has conducted a poll to assess the impact of the pandemic on defence manufacturing.

Analysis of the poll results shows that the COVID-19 pandemic is expected to increase consolidation and fragmentation in the defence manufacturing industry, as opined by 63% of the respondents. 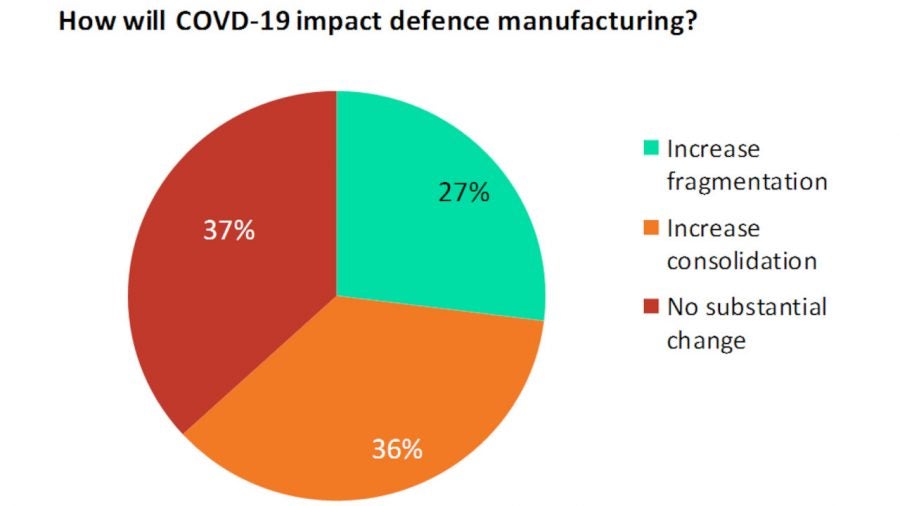 The analysis is based on 345 responses received from the readers of Verdict’s defence sites Airforce Technology, Army Technology, and Naval Technology between 08 July and 29 September 2020.

The inability to source the required equipment even forced some of the manufacturers to alter their production lines to manufacture medical equipment such as ventilators and masks. During the initial stages of the pandemic in April, the Pentagon had announced that it anticipated a three month delay in major defence programmes due to disruption within the domestic and overseas supply chains.

Small suppliers and businesses are the most affected by the disruptions caused by the pandemic, which ultimately impacts innovation in defence technologies.

Companies such as Lockheed Martin acted promptly by making accelerated payments to supply chain partners to sustain its manufacturing operations.

In the US, the Department of Defense (Dod ) announced a $135m Defense Production Act Title 3 in June 2020, to sustain critical manufacturing capabilities including body armour, aircraft and ship building. The DoD announced agreements with a number of companies including Bethel Industries, GE Aviation , Spirit AeroSystems , Steel America, and Allied Systems to supply critical components to sustain defence manufacturing capabilities.

Demand for spares, however, is expected to decline due to reduced maintenance needs, according to Deloitte which also anticipates a slowdown in aircraft production.

US to deploy HIMARS platoon and infantry company in Estonia