Today, around 90 countries fly military drones, ranging in size from the Global Hawk, with its 40m wingspan, 6,800kg weight and $131.4 million price ticket, right down to the likes of the diminutive 18g Black Hornet costing just $40,000.

With widespread agreement that UAVs are the future of warfare, and the scope of missions they can be tasked with growing apace, they are one of the hottest sectors for R&D as drone manufacturers and defence departments focus on perfecting flexibility, endurance and autonomy.  It seems the age-old trade off between the higher speeds and longer range of fixed-wing aircraft and the flexibility that rotor-wings enjoy to hover, take-off and land vertically may soon be a thing of the past for future drone designers.

A new concept technology for ‘Adaptable UAVs’ has been unveiled by a team of BAE Systems engineers and Cranfield University students that could see the next generation of military UAVs built to be able to alternate between fixed and rotor flight modes within the same mission.

Envisioned as a donut-shaped fuselage between two fixed wings, this propeller-driven hybrid design is able to be launched and recovered via a special pole that docks with the Adaptable UAV through the central hole in the drone’s body. Using this method, several individual UAVs can be held in a kebab-like stack for release from the ground, surface vessels or submarines, or dropped from larger aircraft in a deployment module hanging beneath a parachute.

“Integrated within the Adaptable UAV itself would be a range of novel technologies.”

By tilting one of its two engines so that they face in opposing directions, the UAV spins around its central axis, effectively turning its wings into a rotor and allowing it to leave the pole. Once clear, tilting the engine back to face forward once again, the aircraft can fly to its destination in a conventional fixed-wing mode, with the option to hover, or re-dock with a recovery pole as required by simply switching to the fore-and-aft-facing engine configuration.

Integrated within the Adaptable UAV itself would be a range of novel technologies, including adaptive flight control and advanced navigation and guidance systems, which will help it fulfil a spectrum of potential missions in complex, cluttered operating environments.

With the rise of military operations in urban areas, and the growing sophistication of air defences, the BAE/Cranfield group think this kind of hybrid drone technology could give tomorrow’s military the kind of edge they will need in future conflicts.

Martin UAV’s V-Bat offers an alternative solution to the rotor-wing/fixed-wing conundrum, which is based on technology that is available today, and according to the company, the US Army, Navy and Marine Corps have already all been showing an interest in the aircraft.

The V-Bat brings the operational convenience of vertical take-off and landing, coupled with the high endurance and performance of a conventional fuselage and fixed wing design. Driven by a mechanically simple, 183cc 2-stroke propulsion unit that uses a single enclosed fan for both vertical and horizontal flight, the aircraft requires no launch or recovery equipment and can operate from an area of just 20 square feet (1.8m2).

Able to stay aloft for more than eight hours at 45kts, it can carry a swiftly changeable payload of five pounds (2.2kg), which can include electro-optical and infrared systems, laser designators and signals intelligence with 4G LTE data links, potentially playing a critical mission role at the tactical level. 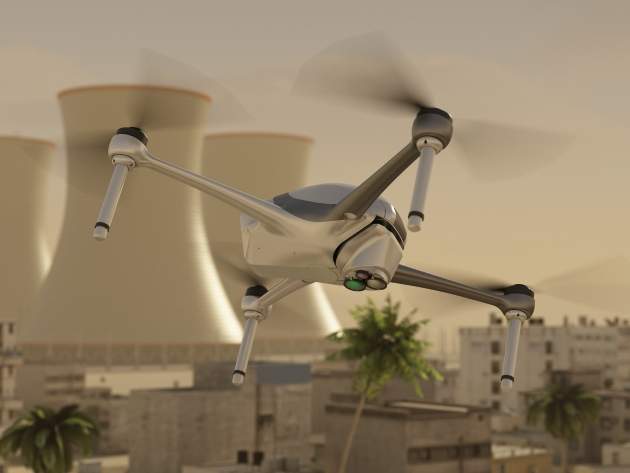 V-bat has an operational ceiling of 15,000ft (4,570m), covers a speed range from stationary hover to a maximum of 90kts, with a telemetry range of 35 miles (56km), and an operational fuel range of 300 miles (480km). Capable of seamless transition from vertical to horizontal flight and back again, the drone can provide ‘hover-and-stare’ operations at any stage of the mission, while its minimal launch and recovery footprint, and low weight make it ideally suited to deployment in confined areas.

It is not just the way that drones fly that may be about to change; in the future, they may be powered differently too.

Currently, UAVs either run on conventional fuels, or are powered by batteries, but, according to a recent report from research specialist Technavio, fuel cells will become increasingly important for future generations of military drones, with the market set to grow a CAGR of more than 14% by 2021.

Technavio found that there are few players in this niche sector globally, not least because the high initial investment barrier acts as a disincentive to new entrants, and those that are active are investing heavily in R&D.

Amongst those that the study identified as leading players in the military UAV fuel cell market is Montreal-based EnergyOR Technologies, which has an enviable record in developing compact fuel cell products for drones. The company’s EPOD fuel cell is the power source behind its H2QUAD 1000 drone, which has been selected by the French Air Force Centre d’ Expertise Aérienne Militaire (CEAM) for joint development testing.

Described as “the most advanced multirotor UAV in the world” by EnergyOR, the fuel cell powered H2QUAD 1000 represents a significant step forward in the evolution of small electrical aircraft, which are becomingly increasingly important for defence and security applications.

Although rechargeable battery technology has moved on considerably over recent years, the flight times of existing battery powered drones remains limited; the H2QUAD 1000 by contrast is capable of carrying a one kilogramme payload and keeping it aloft for more than two hours – up to four times longer than an equivalent conventional platform.

Now in the second phase of the Joint Development Agreement at CEAM, the aim is to produce a next-generation, optimised, long-endurance, fuel cell powered UAV to meet the needs of future operations.

The ‘swarm’ concept has been around for some time, but the key sticking point to date has been achieving the level of coordination and cooperation needed to enable large numbers of individual drones to act together as an integrated, cohesive unit. Solve that problem and the technology ‘offsets’ which have for so long given the US and its allies an almost unassailable advantage could be largely swept aside, and the preeminent trend of the last 25 years for fewer but more advanced and expensive weapons systems reversed.

In the future, sophisticated platforms could be overwhelmed by the sheer weight of numbers of very much cheaper drones, which though technologically inferior, are driven by intelligent software and superior algorithms.

According to reports emerging from China, it seems to be the way at least some in Beijing are thinking, viewing swarm technology as the means to target high-value US assets, should the need ever arise. Given Chinese capacity to manufacture cheap electronic goods, and the kind of processor, networking, power and thermal management research currently rumoured to be being funded by military budgets, both directly and at arm’s-length, it seems China is already gearing up for the ‘swarm wars’ to come.

It is perhaps small wonder then that the Pentagon has been upping its own counter drone defence research. US air superiority has ensured that no American ground troops have been killed by enemy aircraft since the Korean War; they clearly want to keep it that way.