Just a month or so before the event, TITAN was down-selected for the UK Defence Science and Technology Laboratory’s (Dstl) Autonomous Last Mile Resupply competition to safely and reliably deliver vital supplies to the front line. TITAN was showcasing new payload-handling solutions at DVD2018, but, as QinetiQ campaign manager for land autonomy Keith Mallon explains, the hardware is just one part of the overarching solution.

“In conventional hierarchical resupply, troops have to manually check their ammunition status, check all they’re holding, check their inventory, figure out what they have and what they might need, and that’s a very long, drawn-out process,” he says.

“When a resupply mission is due, the delivery is planned via a tactical planning system that calculates a route for an air or ground platform.”

“How we can help is by providing a user interface app, which was developed by the University of Hull, and that is what will top up what the unit, whatever level and size they are – section, platoon, company – to a level appropriate for what they are scaled for and what supply level they currently have. And that delta will trigger a resupply request.”

That resupply request is transmitted over a bearer network data link by supplied by IQHQ to a back-end logistics system that understands where the inventory of material is, where it should be, and how that needs to be rebalanced. “That effectively gives you a commander’s intent for a logistics mission,” says Mallon.

When a resupply mission is due, the delivery is planned via a tactical planning system that takes in the full dynamic range of planning factors and calculates a route for an air or ground platform, which is tasked at the operator’s preference.

“So then they’d say right, it’s a high-risk, high-threat mission, let’s send the air platform,” explains Mallon. “If I need a heavy load and it’s not that urgent, it’s going to be the ground platform.”

Delivering the goods with hoverbike support

The air capability is provided by a Malloy hoverbike, dubbed the world’s first flying motorbike. It is controlled by a ROKE autonomy stack that offers complex autonomous behaviours, including automatic take-off, pickup, landing and rendezvous, plus night operation capability.

TITAN is the ground platform in question. It is controlled using an autonomy stack provided by self-driving car specialist Oxbotica with an extra level of GPS-denied navigation functionality provided by Aberystwyth University.

“Soldiers began experimenting with TITAN as part of Army Warfighting Experiment in November and December 2018.”

“And then, at the very sharp end, once all the supplies arrive, you can drop them off with a mini drop rack,” says Mallon, indicating TITAN’s new cargo-handling system, on public display for the first time at DVD2018. “That means if you have a 650kg payload, you’re not looking at the other guys saying, ‘right, how are we going to get it off the thing?’ It just drops it all the way off, nice and simple on a cheap piece of steel, just a pallet rack. That’s it.” 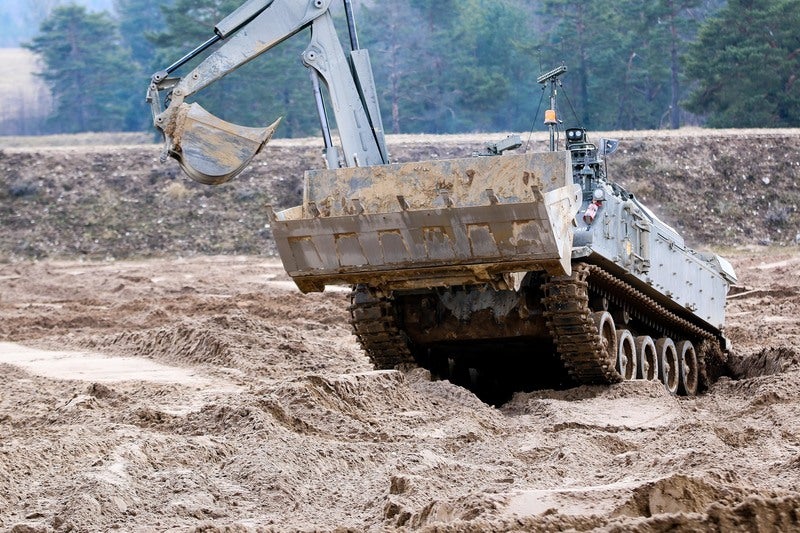 Previously configurations of TITAN carried a cage into which personnel could stack structured loads. The new system handles NATO standard-sized pallets and can be operated automatically or autonomously.

Soldiers began experimenting with TITAN as part of Army Warfighting Experiment in November and December 2018. Powered by a diesel/electric hybrid engine, its current top speed is 24kph with a range of 200km, but it can also operate in an all-electric run-silent mode. Its open architecture platform means it can be reconfigured to support a wide range of missions.

“We’ve been carrying effective payloads up to 80kg and can still be combat effective,” says Mallon. “It’s got plenty of grunt, and we’re adding new innovations all the time.

A team effort for the Last Mile Resupply competition

QinetiQ collaborated with a number of partners for the Last Mile Resupply competition, including several from the academic world, but there was no concern about sharing information outside the circle of military contractors.

“All the people that we have collaborated with have been part of Autonomous Last Mile Resupply phase 1, so they were all Dstl-assured suppliers to that programme,” says Mallon. “At this stage and with the technologies that we’re using, it’s all happening at official level, so there’s nothing especially sensitive at this point.

“There are some things that need to be protected at a later stage, but that’s when we bring in those restrictions. A lot of the academic world has been doing military research for a long time, so they understand how to manage those restrictions and those data protection pieces.”

Mallon adds that the combined, varied skills team members have brought to the project have been vital to its success.

“Look at a combination of Milrem, Roke, and Malloy, Aberystwyth, Oxotica, IQHQ and the University of Hull and you’ve got a real panoply of military, industry and academic experience,” he says. “That’s one of the key things that you see that we are bringing together cohesive systems integration to deliver an advantage. Nobody can do it all by themselves; it all has to be collaboration.”