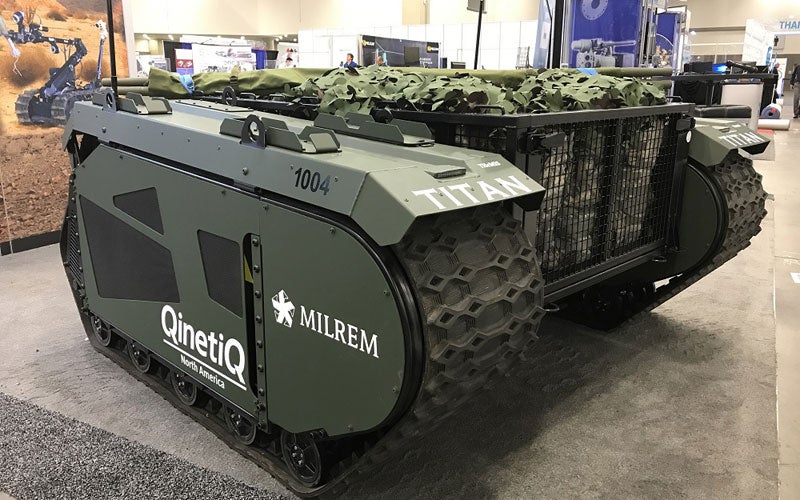 The UGV was unveiled at the 2016 Association of the United States Army (AUSA) Annual Meeting. It was also displayed at the ninth annual Ground Vehicle Systems Engineering and Technology Symposium (GVSETS) held in August.

Titan was preferred by the US Army for the Phase 1 evaluation of the Squad Manoeuvre Equipment Transport (SMET) programme.

The vehicle also participated in phase one of the UK Ministry of Defence’s Autonomous Last Mile Resupply (ALMRS) programme to demonstrate the use of autonomous systems for the delivery of vital supplies and humanitarian relief to the front line. It is also being offered for the phase two of ALMRS competition.

The Titan UGV also took part in the rigorous tests conducted by the British Army troops during the four week Army Warfighting Experiment 18 (AWE18), which is also known as Autonomous Warrior. The UGV’s multi-role capabilities have been demonstrated different terrains during the experiment.

The vehicle is intended to save the lives of soldiers as it performs critical and hazardous tasks currently handled by war fighters in the combat zone.

Titan is a multi-mission UGV that can be reconfigured to enhance mission effectiveness. It integrates the battlefield-tested robotic systems and controller from QNA and THeMIS UGV platform and modular mission payload developed by Milrem.

The platform includes two track modules connected by a payload frame. The open architecture of the Titan UGV allows for the integration of mission equipment and systems to support a range of operations.

Titan UGV is capable of carrying a maximum payload of up to 1,500lb. The higher load carrying capacity provides force multiplication for the users. The vehicle offers a maximum pull force of 2,000lb.

“The vehicle is intended to save the lives of soldiers as it performs critical and hazardous tasks currently handled by war fighters in the combat zone.”

The unmanned ground vehicle can be operated in both unmanned and manned modes based on the mission. It can be integrated with cameras, and day / night infrared (IR) and thermal imaging systems to perform missions during the day and night.

The command and control of the UGV is handled using the QinetiQ tactical robot controller (TRC) and robotic appliqué kit (RAK). The TRC is a single pocket system integrating a 6.5in monitor, button layout and auxiliary port. It can be easily attached to the communications pack of Titan to command and control the UGV’s operations.

Engine and mobility of Titan UGV

The vehicle can attain a maximum speed of approximately 24km/h and cross trenches with a maximum width of 30in. It offers optimal off-road mobility and can be transported by helicopters internally or as slung load.