Back in 1991, as Operation Desert Storm played out nightly on the extended TV news, the capabilities of precision-guided munitions came as a revelation to the viewing public. GPS was a technical wonder and promised a new era of warfare, quickly pulling the viewer into the easy jargon of ‘smart bombs’ and ‘minimised collateral damage.’

A quarter of a century on from the Gulf War, and GPS is everywhere, and in everything – but it is also a quarter of a century older too. Technology that was once revolutionary and expensive has become familiar, cheap and, frankly, a bit passé, but at the same time it has been deeply integrated into almost every aspect of modern life. From the military to the mobile phone, GPS now forms a ‘given’ part of the 21st Century – but in doing so, it has also become a potential victim of its own success. A growing number of voices, and most recently a programme manager at the US Defense Advanced Research Projects Agency (DARPA) itself, now describe GPS as ‘a single point of failure’ (SPOF).

SPOFs exist when the loss of just one crucial element in a system can incapacitate the whole of the rest of it, and GPS offers that on an almost unimaginable scale. Aside of its wholly military function, it also provides a framework for a huge range of other industries and activities too, including civilian air, sea, road and rail transport, the emergency services, agriculture, fisheries, cellular networks, utilities and the financial system. Good though GPS is, the system has its vulnerabilities.

One of the biggest is the relatively weak GPS signal itself. Beamed down from medium earth orbit, it has been likened to the equivalent of relying on the light from a 25W bulb shining in Sydney to see your way around New York – and that is when obstacles such as buildings and mountains let the signal reach you in the first place. A whole range of interruptions, from sunspots and natural events in the ionosphere to other legitimate civilian and military transmissions can all wreak havoc with GPS reception, and beyond that, the signal is susceptible to being deliberately blocked by criminals or foreign militaries.

This was a problem that emerged even as the shiny new wonder was being showcased in the sands of Iraq and Kuwait. Despite the huge technological mismatch, it did not take Saddam Hussein’s forces long to discover that even relatively unsophisticated devices could drown out the GPS signal in radio noise. That vulnerability remains, but while in 1991 jamming GPS called for some degree of technical know-how and access to resources, 27 years later, plans off the internet and cheap, readily available hardware bring it within the range of almost anyone.

The effects of jamming can be dramatic. In a 2009 test, a jammer with less than a thousandth of the power of a mobile phone aboard the Trinity House vessel Galatea forced false positions to be displayed on the electronic chart and relayed by the automatic identification system to nearby shipping. In addition, satellite communications, the distress safety system and helicopter deck stabilisation failed, clocks went wrong and the ship’s radar and gyrocompass were affected too.

Never-the-less, straight-forward jamming is unlikely to pose the greatest threat, primarily because it is a very blunt instrument and not one that is likely to pass unnoticed. In the event of any abrupt loss or sudden degradation of the signal, a surprising range of devices will detect the problem, not just the GPS receivers themselves, and sound the alarm.

A skilful spoof, however, is something altogether different.

Spoof and the art of graceful degradation

Spoofing is all about feeding false positioning, navigation and timing (PNT) information to a receiver, to fool it into displaying a ‘wrong’ location, in such a way that the deception remains undetected. The real trick to a good spoof lies in what is called ‘graceful degradation’ – making carefully managed, incremental shifts in the fake GPS signal so gradually that they pass unnoticed. Just how effective that can be was demonstrated off the coast of Italy by a team from the University of Texas, back in 2013, slowly sending an $80m USD yacht off course, while its high-end navigational systems continued to show it travelling in a straight line.

There have been other, less subtle, examples reported too. In 2011, Iran claimed to have hacked a US RQ-170 Sentinel drone and spoofed it into landing at an Iranian airbase, while last year, more than 20 vessels near the Russian port of Novorossiysk in the Black Sea found their apparent position had shifted to Gelendzhik Airport – 32km further along the coast. The incident has echoes of the earlier stories of Pokemon Go players around the Kremlin seemingly teleported to Vnukovo Airport, and fuels the growing speculation that Moscow is honing new electronic warfare skills. 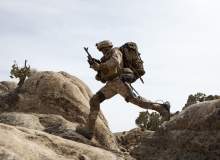 Unsurprisingly, the Pentagon has been looking again at its options.

One possibility being developed by the US Army involves a ground-based mini-constellation of GPS-like pseudo-satellites; Dubbed ‘pseudolites’, they bring two main advantages to the PNT arena. Firstly, they can provide a much higher powered – and thus harder to jam – signal, and secondly, they can be specifically located to ensure coverage in the kind of places that GPS currently struggles to reach. Broadcasting a similar signal to GPS, which can be picked up by the same receiving devices that soldiers are already familiar with, pseudolites could be used to supplement GPS when coverage is weak or temporarily unavailable, as a check to guard against spoofing, or as a stand-alone in GPS-denied environments.

At DARPA, researchers are also working on perfecting its Adaptable Navigation Systems (ANS), an approach that has already been tested on some navy vessels and army Humvees. There are two main, complementary elements to ANS – the Precision Inertial Navigation Systems (PINS) and All Source Positioning and Navigation (ASPN). PINS aims to provide better inertial measurement, requiring fewer external position fixes, while ASPN draws on non-GPS signal sources, such as cellular networks, TV stations and commercial satellites, to give those external positional fixes when necessary. Combining the inputs from all of these, correlating them against a database of known sources and crunching the numbers via the new algorithms that DARPA are concurrently developing will then enable an accurate PNT to be determined.

Aside from these and other ongoing research projects, there are other possibilities too. Satelles’s commercial satellite time and location signal from the satellite-phone Iridium constellation can already provide GPS-independent PNT, and the US Navy is exploring a return to the LORAN, a WW2 long-range radio navigation system that survived until 2010, when GPS was deemed to have made it obsolete, and it was shut down.

Looking even further back into the history of technology, three years ago, the US Naval Academy resumed teaching celestial navigation, after an absence of more than a decade. Of course, navigating by the stars is all very well, but no one would suggest that even when conditions make it possible, it can replicate the accuracy of GPS. However, in the right hands, old school solutions such as sextants, maps and compasses offer something that GPS never can; a quick and un-hackable check that you really are where you think you are. Well, roughly, at least.