Night vision: a light in the dark?
Menu

According to a report from the research company Markets and Markets, the night vision device market (NVD) is projected to exceed $7.73bn USD by 2020, rising at a CAGR of 8.8% from its 2015 value of $5.07bn. Some estimates put its future worth even higher than that, with defence purchases tipped to boom as countries ramp up their modernisation programmes and increase their surveillance capabilities in the wake of ongoing conflicts and growing geo-political uncertainty.

Eighty years on from Germany’s first experiments with so-called ‘generation-zero’ (Gen-0) technology, night vision has come of age and today no army can be without it.

Early beginnings: the Vampir of the Eastern Front and the US Sniper Scope

When those first systems were introduced in 1939, the limitations of the then-fledgling field of electro-optics technology meant that the new devices were big and cumbersome. The earliest versions often depended on huge, vehicle-mounted infra-red searchlights to provide the necessary invisible illumination, making them useful as night sights on tanks, but severely restricting their value to infantry.

“The infra-red ‘Sniper Scope’ is said to have been instrumental in some 30% of the total Japanese casualties.”

As the war progressed, Gen-0 advancements in Germany, the UK, US and Russia increasingly began to overcome those limitations, with some notable successes recorded, particularly as the conflict drew towards its close. On the Eastern front, veterans spoke of night snipers using “peculiar non-shining torches coupled with enormous optical sights” – the ‘Vampir’ NVD developed for the Sturmgewehr 44 assault rifle.

The improved technology came too late to change the course of the war for the Third Reich, but its performance in the Pacific may have gone a long way to establishing the value of night vision capability, and ensuring it remained a major priority for research. In the opening week of Operation Iceberg, as US forces fought to retake Okinawa, the infra-red ‘Sniper Scope’ is said to have been instrumental in some 30% of the total Japanese casualties that fell to small-arms fire – a remarkable tally given that only around 500 of them were issued at the time.

Going passive with ‘Starlight’ and the NSPU 1PN34

Active infra-red technology remained the mainstay in the post WW2 era, with the likes of the Sniper Scope, by then the 4th model of the Mark 3 version, seeing service throughout the Korean War, and the AN/PAS-4 subsequently deployed during the early years of the Vietnam conflict. By 1961 however, a major breakthrough paved the way for the next step in night vision, and the next generation of devices soon followed.

Gen-1introduced passive, image intensifying systems such as the US AN/PVS-1 ‘Starlight’ and the Soviet Union’s NSPU 1PN34 rifle sights. Freed from the need to illuminate the darkness actively, the new scopes worked on available ambient light, using significantly improved photocathode technology to intensify and amplify it by around 1000-fold. The earliest versions were particularly bulky, and required good moonlight to function at their best, which was an obvious problem on moonless nights of the month or when under cloudy skies.

Extensive development followed to reduce the weight and improve both the performance and reliability, and by the closing days of the Vietnam War, new image intensifying technology was to emerge that enabled the jump to Gen-2, and the kind of superior capability that General McCaffrey enjoyed in Kuwait and Iraq.

“Breakthroughs in thermal imaging enabled soldiers to ‘see’ the heat emissions from people and objects.”

Second generation devices provided a real step-change, with enhanced image intensification thanks to the combination of the new micro-channel plate (MCP) and upgraded S-25 photocathode. Providing light amplification in the region of 20,000 times, the resulting high-quality image was considerably brighter than with Gen-1 devices, and almost entirely free of distortion.

This period also saw the start of a huge proliferation of technologies and systems in the sector, as breakthroughs in thermal imaging enabled soldiers to ‘see’ the heat emissions from people and objects, even in complete darkness, and night vision technology reached beyond rifle sights to spawn other kinds of devices, most notably night vision goggles (NVG). 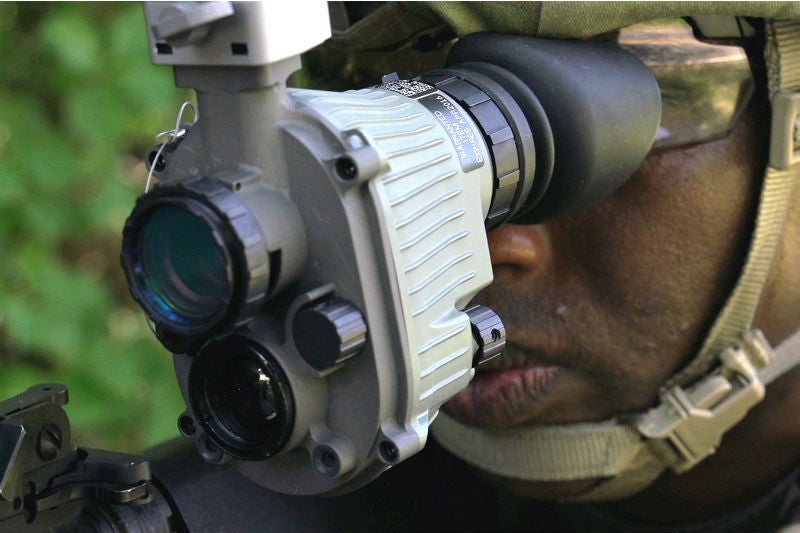 In some ways, the move to Gen-3 came as a bit of a mixed blessing. These systems retain Gen-2’s MCP, coating it with an ion barrier film to prolong tube life and replace the S-25 photocathode with one made from gallium arsenide (GaAs). In theory, this GaAs photocathode should significantly improve image resolution, but in practice, the gain has been muted because the ion film reduces the number of the electrons passing through, and additionally increases the halo-effect seen around bright light sources. Gen-3 tubes also demand more power than their Gen-2 equivalents, although on the plus-side, they can achieve two-and-a-half times greater light amplification.

To address the shortcomings, devices were developed that either greatly reduced the ion barrier, or omitted it entirely and added an automatic gated power supply system to regulate the photocathode’s voltage, thus enabling it to adapt to changing light conditions instantly. Known as Gen-4 in some markets, and to the US military as Generation 3 Auto-gated tubes, these systems bring unparalleled light sensitivity and operational performance – but they are certainly not the end of the story.

Future possibilities: Bringing forward-looking infra-red to soldiers in the field

A range of new possibilities are waiting. Advances in both long- and short-wave infra-red technology could bring the kind of forward-looking infra-red capability currently only really seen on aircraft and vehicles, to soldiers in the field, while Complementary Metal Oxide Semi-conductor and Electron Bombarded Active Pixel Sensors promise new levels of low-light imaging clarity.

“Future devices are likely to show a strong trend towards incorporating multiple, stand-alone capabilities in a single unit.”

Future devices are likely to show a strong trend towards incorporating such multiple, stand-alone capabilities into a single unit, and additionally a high level of integration between individual NVDs themselves, allowing, for example, soldiers to use their gun-sights to take a clandestine look around corners.

Going even further, other technologies too can be expected to play more of a role, including eye-tracking, tactical overlays and the inclusion of microelectro-optics to overcome the severely narrowed field of view – perhaps as little as 40 degrees – of current designs, compared with around 165 degrees of normal human vision. The familiar ghostly green hue of night vision might also disappear with the possible wider introduction of multi-colour image rendition.

NVGs in particular seem poised to see some of the biggest changes, as the trend towards reducing their size, weight and power demand continues, and unit prices drop, favouring the growth of enhanced night vision goggle (ENVG) technology.

The fusion of thermal imaging and image intensification into a single device makes for rapid target acquisition and significantly greater situational awareness, as systems now being developed can highlight the outline of an individual soldier against the background. In addition to improving threat detection and identification in all operating conditions, including total darkness, ENGVs are set to become shorter, reducing forward protrusion by perhaps as much as three or four inches, as attention focuses on the form, fit and extended wearability of the devices too.

In future, ENVGs may also have super-zoom facilities, allowing a small area of view to be examined in closer detail, and be able to transfer data seamlessly with other elements of a secure battlefield network. Looking even further ahead, advances in sensor technology such as the super-thin grapheme-based infrared light sensor recently devised by researchers at the University of Michigan could ultimately see NVGs looking more like Ray-Bans or even in the form of contact lenses. Night vision still promises to have a long way to go.