The 9K333 Verba man-portable air-defence system (MANPADS) from Russian arms manufacturer KB Mashynostroyeniya is a successor to the Soviet-era Igla-S MANPADS. The system entered service with the Russian Armed Forces in 2015. It employs a 9M336 missile, which can travel at a speed of 400m/s to engage targets located within a range of 3km.

The Verba system integrates a 9M336 missile in the launch tube, a 9P521 launching mechanism, and a 1L229V ground-based identification, friend or foe (IFF) interrogator. The target engagement capabilities of the MANPAD can be further enhanced with the installation of target detection, recognition and designation systems.

The 9M336 missile features a tri-mode, passive homing seeker and carries a 2.5kg blast-fragmentation warhead with an impact and proximity fuse. It is capable of striking fixed-wing and rotary-wing aircraft, as well as unmanned aerial vehicles flying at altitudes up to 3,500m. It offers a high counter-countermeasure (CCM) capability in natural, cluttered environments and against pyrotechnic thermal decoys.

The FIM-92 Stinger MANPADS is a fire-and-forget missile manufactured by Raytheon Missile Systems. It entered service with the US Army in 1981 and is a successor to the FIM-43 Redeye MANPADS. The missile is currently in service with more than 18 countries and the four US armed forces. It has scored more than 270 hits against fixed and rotary-wing aircraft.

The Stinger system weighs 15.2kg and integrates a sight assembly, a grip stock assembly, a battery coolant unit and a missile round. It employs the latest Stinger-RMP missile equipped with a passive infrared seeker. It carries a 3kg penetrating hit-to-kill warhead equipped with a proximity fuse.

The missile travels at a speed of 750m/s and can engage targets at altitudes up to 3,500m and within the range of 8,000m. It offers high kill rate against fast-moving aerial targets, including low-level fixed and rotary-wing aircraft, rotorcraft, and cruise missiles.

The man-portable system weighs 19.7kg and its lightweight launcher allows for firing from the ground or a vehicle, building or vessel. The MANPADS uses a MISTRAL fire-and-forget missile, which integrates a homing head that is 40% bigger than that of its contenders and holds a 3kg warhead when compared to 1.2kg warheads carried by rival weapons.

The MISTRAL VSHORAD system features a thermal sight and an IFF and can be interfaced with a fire-control and coordination system. It offers a high velocity of 930m/s and high kill probability against a range of aerial targets, including high-speed and highly manoeuvring fixed-wing combat aircraft and rotorcraft.

The STARStreak Lightweight Multiple Launcher-Next Generation (LML-NG) is a man-portable close air defence system offered by Thales. It entered service with the UK Royal Army in 2000 and is also operational with the armed forces of South Africa, Thailand, Indonesia, and Malaysia. 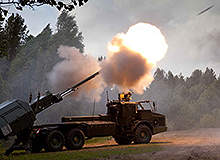 The 10 most effective self propelled artillery

Each LML-NG unit integrates a tripod, a head assembly, and a sensor assembly weighing up to 53kg. It can be assembled and combat-ready in less than two minutes. The MANPADS uses two ready-to-fire STARStreak missiles to engage multiple targets in quick succession. It employs TV and thermal imaging cameras and manual or automatic target tracking modes for high hit probability.

The STARStreak missile has a maximum speed of 1,029m/s and can engage targets within the range of 7,000m. It carries three dart payloads and uses a laser beam riding guidance system. It offers better coverage and high altitude performance, as well as high accuracy against small aerial targets such as UAVs.

RBS 70 NG (new generation) is a man-portable very short-range air defence (VSHORAD) system offered by Saab. It is an improved variant of the RBS 70 system, which has been acquired by 19 countries worldwide. The modular design of the new VSHORAD is compatible with the current generations of RBS 70 missiles up to the latest fourth-generation missile BOLIDE.

The 87kg MANPADS includes a missile in a launch container, a tripod firing stand, and an NG sight. It employs the new BOLIDE all-target VSHORAD missile equipped with a laser beam rider guidance system. The missile has a speed of 686m/s and can engage fixed and rotary wing aircraft, as well as cruise missiles and UAVs at altitudes up to 5,000m and ranges exceeding 9km.

It offers a high hit probability and engages targets in clutter and countermeasures environments. The combined shaped-charge and pre-fragmented warhead carried by the missile further enables the system to defeat aerial and ground targets protected with armour.