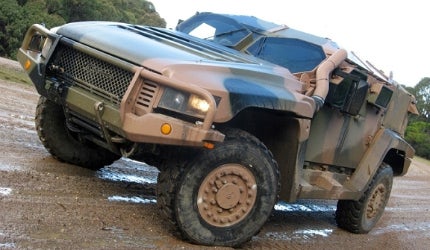 The neat, slimline frame of the four-door variant of the prototype Hawkei created such a buzz at the Eurosatory exhibition in Paris last July that it made sense to climb inside, escape the noise, and discuss just what was getting the industry talking.

Right from the outset, the elements that make it unique start to assert themselves – it is a modest step up to the generously proportioned interior rather than the steep climb some rivals require.

“This vehicle is relatively low to the ground in terms of ingress and egress,” says Paul Harris, director of strategy, sales and marketing for the Protected Vehicles division of Thales Australia. “That was a conscious decision to try and make the vehicle comfortable and liveable. This is not a box on a set of stilts on top of a truck.”

“Higher levels of ballistic protection can be delivered through optional clip-on armour that can be installed by the crew in the field in less than 30 minutes.”

In part this is achieved by having a shallow V-shaped hull floor to deflect and absorb blast energy designed by Plasan, Thales’ partner on the vehicle and the ones responsible for the hull of the vehicle and blast and ballistic survivability.

“In a deep V vehicle like the Bushmaster, it’s more elevated off the ground,” says Harris. “This sophisticated design by Plasan allows the vehicle to be easily accessible, while still having good ground clearance, mine protection and the ability to have large, generous doors to get in and out of the vehicle with your battle gear on in battlefield conditions.”

The direct comparison with Bushmaster, also made by Thales Australia, is no coincidence. The company recently signed a contract with the Australian Department of Defence to deliver six prototypes under the LAND 121 phase four programme, which will eventually acquire 1,300 new light protected vehicles to replace the current Land Rover fleet. The company deliberately specified that its 7,000kg lightweight protected vehicle would deliver ‘Bushmaster-like’ levels of mine-blast protection.

“The 15 ton battle-proven Bushmaster has served in Timor, Iraq and Afghanistan, and has been subjected to many attacks and blasts,” says Harris. “Many Australian and Dutch soldiers are alive today because of Bushmaster.”

Even higher levels of ballistic protection can be delivered through optional clip-on armour that can be installed by the crew in the field in less than 30 minutes. Despite being as protected as a Bushmaster, Hawkei is sufficiently lightweight to fulfil the Australian Defence Force’s requirement of beying deployable from a CH47 Chinook helicopter.

“We have to remember that this is not a tank, so it has to have some general utility,” says Harris. “We’ve designed the Hawkei to be flexible and useful so this variant has four large doors, large internal volume and generous seating for potentially up to six personnel, depending on your radio and C4i configuration. We also have a two-door utility variant with a large tray at the back for carrying a payload beyond 3,000kg.”

Inside the Hawkei vehicle’s engine

To further enhance survivability, the engine and transmission are located side-by-side at the front of the vehicle rather than having them in the crew car bay. A cross drive transfer and a transfer case feeds down to the centre line.

“The two models can have their C4I assets configured to carry out command, liaison and troop carrier roles.”

“The only thing going under the vehicle is a drive shaft,” says Harris. “That means you have no intrusion of a transmission tunnel into the vehicle so the transmission cannot become a secondary projectile in a blast.”

These advanced features are fitted to a simple, sturdy structure – the body is a steel box formed from a bolted-together kit that means no complicated welding system is needed to manufacture the vehicle.

The two models can have their C4I assets configured to carry out command, liaison and troop carrier roles. Key to this is Hawkei’s vehicle VSAS net electronic architecture (VEA) which enables Hawkei to be sub-system agnostic.

A number of systems can be integrated into the one harnessed system, minimising the number of boxes in the vehicle and enabling operators to switch, with the press of a button, between surveillance camera video feeds, thermal cameras and local situational awareness cameras. It could also be configured to operate a remote weapons station, and then cycle through to the battlefield map on the same screen, for Blue Force Tracking.

All those systems require high levels of reliable power, and if the trend for increasing numbers of electronic gadgets continues, even more may be needed in the future.

The vehicle has an in-line starter generator in lieu of an alternator, which generates about 65kW of constant electrical power which can support all the internal systems and provide external power via a slave socket. The power supply, where it is applied and rapid transition to blackout or silent watch modes, can all be managed the central internal screens.

The electrical power and electronic configuration are among the elements monitored through the vehicle’s health usage monitoring system (HUMS).

“You can also check tire pressure, battery power charge and manage the entire vehicle,” says Harris. “By using open architecture one box captures all the feeds and consolidates them through central computing systems, minimising the human factor engineering challenges of multiple boxes.”

Thales’ Australia’s other partner on the Hawkei is Boeing Defence Australia, who are supplying their leading ILS (integrated logistics support) engineering expertise to the programme.

“We’re really capitalising on the specific strengths coming from the Boeing systems into our business,” says Harris.

Harris concludes that should Hawkei be adopted, its open architecture, common standards, power supply and generation, and the consolidation of systems, will work together to help future-proof it while minimising on space, weight and power.

“The way we use this vehicle today will be completely different in ten or 20 years’ time,” he says. “We’re trying to optimise the system flexibility because every customer will have different priorities that will change regularly over time as dictated by operational requirements.”

The Bushmaster 4×4 armoured vehicle is currently deployed in Afghanistan with the Australian Army.

Hawkei is a lightweight protected vehicle designed and developed to meet the requirements of the Australian Defence Force (ADF).