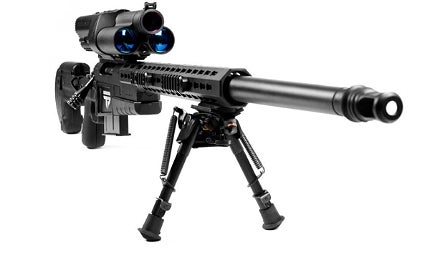 In asymmetric warfare, few positions are as globally revered as the sniper. Capable of operating with extreme precision, snipers possess the admirable ability to alter the course of combat with a single pull of the trigger.

Such overwhelming responsibility has, until now, come as a result of years of experience and hours honing techniques on the shooting range. Basic training takes 14 weeks to complete, with those successful graduating to Sniper School, where a further seven weeks of rigorous testing awaits them. Highly trained and highly disciplined, those who graduate from the US Army’s Sniper School are regarded to be among the best marksmen available, with the establishment’s failure rate estimated to be approximately 50%.

However, this elitist club of military marksmen could be about to become considerably less selective. Triggered by developing trajectory, projectile and guidance technology, the US Army is working on a range of new systems that could remove the complicated and error-prone calculations snipers are often tasked with, leaving them with a point-and-click solution that could open the band of snipers to any soldier capable of lifting a rifle.

"Basic training takes 14 weeks to complete, with those successful graduating to Sniper School, where a further seven weeks await."

One of the companies leading the charge to simplify sniping is TrackingPoint, the producer of Precision Guided Firearms that boast a "lock and launch" technology akin to that possessed by jet fighter pilots. The company’s claim that its rifles allow "anyone regardless of skill level to hit moving targets at extended range" is almost grandiose, but there certainly appears to be substance to it.

Encapsulated within the rifle is TrackingPoint’s patent pending Intelligent Digital Tracking Scope, which allows the user to identify and ‘tag’ a target by clicking a button to the side of the trigger. An electronic display then adds a red dot to the impact point, remaining fixed on the target.

The rifle’s scope computer then calculates a firing solution, taking into account a range of conditions that are likely to influence the flight of the projectile, including gravity, drag and crosswind, among others. The scope now places the cross-hairs onto where the bullet is projected to hit, with the trigger locked until both the desired impact point and projected landing point match. The user can squeeze the rifle’s trigger, but it will not fire until the two sets of crosshairs match.

As simple as it sounds, the rifle has boasted tremendous accuracy over 1,000 yards and three precision guided rifles – with price tags ranging from $17,500 to $25,000 – are available. Although explicitly designed for the retail market, TrackingPoint’s XS1 precision guided rifle is chambered in .338 Lapua Magnum, one of the remaining candidate calibres for the US Special Ops Precision Sniper Rifle competition.

Never far from the cutting edge of military technology, DARPA has been quick to present a more advanced and sophisticated version of TrackingPoint’s rifles, intended for use by US Army Snipers. Developed by Cubic Defense Applications under a $6m contract, the One Shot XG system can be integrated onto a sniper scope, greatly increasing first round hit probabilities.

Encased in the scope, the One-Shot measures the range to target, atmospheric and geodetic conditions and crosswind velocity with an invisible laser beam that’s undetectable by opposition forces. Data is then collated and used to produce a ballistic solution, with a corrected aim point presented on the sniper’s reticule.

Initial testing proved the One-Shot to be highly effective. First hit probabilities rose by 400%, whereas a 230% reduction to rounds to first hit was also recorded. Arguably most important was a 35% reduction to time engagement, one of the key factors on DARPA’s wish list.

Snipers have proven to be an invaluable advantage to US deployed forces, and with approximately only 300 in full active duty at any one time, can prove to be something of a luxury commodity. Reducing the time in which they are engaged with opposition forces greatly reduces the risk of them being injured or killed in action.

The One-Shot system weighs just 1.4kg and sits on a sniper rifle’s rails, just as a standard scope would. Phase 2-E testing is expected to be completed in the spring of 2013, with field evaluations to be conducted after that. Marine Corps Warfighting Labs expects to receive eight systems in December 2013.

Out of the scope, and into the projectile

Of course, one element targeting systems cannot account for is an unpredicted contributing factor to a projectile’s trajectory, such as a sudden gust of wind or movement of the intended target. Not to be outdone by nature, DARPA has also commenced the development of a bullet capable of compensating for such events.

Extreme Accuracy Tasked Ordnance (EXACTO) projectiles, developed by Lockheed Martin, have been cited by DARPA to combat the prevalence of engaging moving targets in difficult conditions, something which became noted by snipers in active duty in Iraq and Afghanistan.

DARPA state that EXACTO bullets not only revolutionise rifle accuracy and range through the first ever guided small calibre projectile, but reduce engagement timelines and allow greater shooter stand-off range, further enhancing the safety of snipers deployed in the field. The projectile combines a highly manoeuvrable bullet with a real-time guidance system, which is designed to track and deliver the projectile to its target, even allowing it to change course during flight.

DARPA and Lockheed are not alone in developing such capabilities, however. Sandia Labs is currently working on an equivalent projectile, with testing on a four-inch long prototype including an optical sensor in its nose and fins to guide its flight, demonstrating its ability to successfully change direction during flight.

Lockheed’s EXACTO projectiles are estimated to be closer to deployment, having successfully demonstrated its proof of concept in 2011. Phase two development commenced in 2012, with Teledyne Scientific & Imaging awarded a $25m to build and a test a complete system, including an optical sight, projectile and aero-actuation controls.

Ensuring safety as much as accuracy 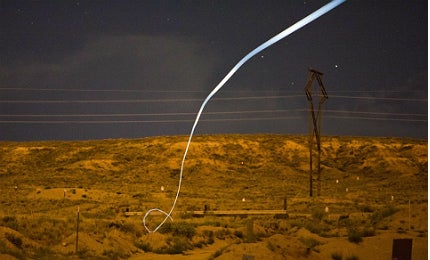 What has become abundantly clear is that sniper accuracy systems are as much about ensuring the safety of snipers in-theatre as they are ensuring the accuracy of shots fired. Reducing engagement times features high on DARPA’s wish list, for both EXACTO and One-Shot systems, with failed shots highly likely to not only reveal the location of deployed snipers, but also the presence of supporting troops.

While the development of systems such as these could be seen as a "dumbing down" of sniper requirements, there is little to no indication that the value of an experienced marksman is diminishing within military circles. The lengths the US Department of Defense is evidently prepared to go to protect them should be adequate testament to that fact.