The evolution of battlefield threats, be it the use of shrapnel in improvised explosive devices or bone-breaking batons in hand to hand combat, has led to a new wave of pioneering body armour and tactical ballistic vest protection.

Although Kevlar, the trademarked aramid synthetic fiber, has become a mainstay of body armour development, new materials and combinations are emerging, promising to protect warfighters from increasing threats, and they’re coming from sources as unlikely as sheep in New Zealand’s Southern Alps.

Coupled with an increased use of new materials is a wave of innovations, such as the combination of body armour with life preserver jackets, designed to cater for the warfighter’s every need.

“Although Kevlar has become a mainstay of body armour development, new materials and combinations are emerging.”

The Englands inflatable body armour system (IBAS) comprises of an inflatable life jacket that can incorporate both soft and hard armour to protect its users from bullet or fragmentation attack, offering a new dimension of protection for warfighters expecting to be submerged in water.

Developed in conjunction with the British Government’s SMART programme and weighing 3.18kg, the life jacket can be fitted with soft or hard armour plates depending upon the needs of the user.

The soft armour supplied with the IBAS offers protection levels that are 500% greater than National Institute of Justice (NIJ) Level 3A specifications.

The soft armour is subject to deformation of approximately 7mm for a 9mm 8gm bullet propelled at a speed of 4.26m/s, with the standard armour plate offering virtually no deformation when subjected to the same conditions.

Developed by Pinnacle Armor, DragonSkin is a flexible body armour system capable of protecting a warfighter from rifle rounds and associated threats whilst also boasting a sense of comfort and operational mobility that other armours cannot offer. The system can mould and flex to the contours of the body, allowing for greater movement and coverage when compared to armour systems that rely on a standard issue base plate.

The system itself boasts the lightest weight for its ballistic and fragmentation protection capabilities and, in testing, demonstrated a 45-52% reduction in back face deformation reduced trauma to the body, allowing the wearer to take multiple hits to the vest with little effect on the body. The armour can protect from armour piercing handgun shells, shotgun slugs, fragmentation and full puncture thrusts, making it an all-encompassing protection solution for soldiers in combat.

Both tactical and concealed specifications can be accounted for, with the vest tailorable to fit both men and women to the 97% percentile. 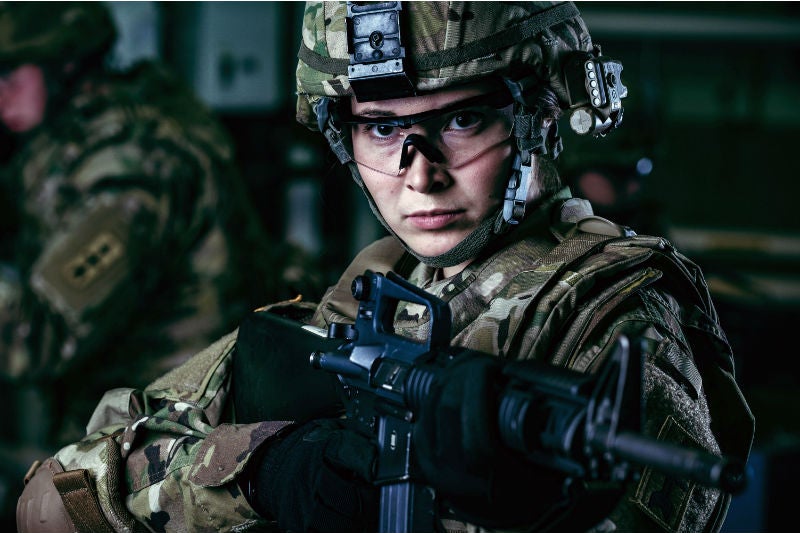 Under armour: the US Army’s new soldier protection system

Greece-based Elmon has developed a range of protection vests, catering for a wide range of operational requirements depending on the mission. The Achilles, Fobos and Psychi vests feature a one-of-a-kind interchange system.

All outer carriers of the vest can be interchanged, allowing a user to buy just one kind of vest and additional carrier systems, leaving the armour plate panels the same.

Changing the outer carrier of the vest provides a different set of benefits, allowing it to be tailored towards a specific operational need, whilst providing an affordable option as just one type of vest needs to be acquired.

The Achilles is an overt vest, designed to be worn above clothing and has a formal design appearance, whereas the Fobos vest is the tactical model and has been fortified perimetrically with a reinforced hem.

The Psychi bulletproof vest is the concealable model and is designed to fit underneath clothing garments to remain undetected. As such, the Psychi vest also comprises of skin-friendly fabrics including Coolmax, which offers maximum comfort.

Produced by Glagio Do Brasil (GDB), the Spike vest utilises Dupont Kevlar technology to protect users not only from bullets, but also from stab and spike attacks. The vest itself is made from Aramid and achieves NIJ Type II Ballistic and Spike protection, offering an areal density of 1.16lbs per square feet.

The London riots of August 2011 showed that body armour is not required just to cater for the needs of warfighters, but also for police in controlling civil matters.

Deenside can cater for this need with what the company refers to as the world’s first flexible blunt trauma body armour system, covering outer limbs and protecting them from attacks from batons, poles or kicks and punches. Fitting closely to the limb and pivot joints, the plating offers unprecedented levels of protection and heat management through the design.

Underneath the hard outer shell is a kinetic energy absorption layer, designed to take the brunt of any attack and protect the user, followed by a heat and moisture venting layer. This layer allows the wearer to manage their body temperature accordingly in a stifling environment, vital for police that are tasked with quelling civil unrest for long periods.

“The soft armour is subject to deformation of approximately 7mm for a 9mm 8gm bullet propelled at a speed of 4.26m/s.”

Although the concept of body armour is more commonly associated with the ruggedised, heavy protection against ballistics and shrapnel, a lighter form of material can also provide much-needed protection against operational threats faced by the warfighter.

Merino wool carries naturally occurring flame retardant properties, which make ideal for use an under layer. With a high ignition temperature of 500-600°C, the material doesn’t melt or stick to the skin upon burning, it merely forms an insulating char and retains its self-extinguishing properties.

The clothing can also be used to protect warfighters from the sun, with merino wool offering ultraviolet protection factors (UPF) of up to 40, higher than the vast majority of comparing fabrics. This compliments the material’s properties of being able to keep the wearer’s core temperature more stable during physical exertion, making merino wool ideally suited to use in hot, arid conflict zones such as Iraq and Afghanistan.

Merino wool has also been proven to possess a very high resistance to acids, chemicals and aerosols in comparison to other fibres, increasing their appeal to the modern warfighter.

Ukraine to receive $150m in security assistance aid from US