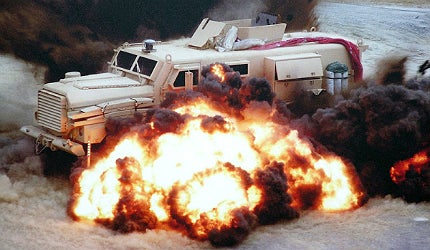 Recent campaigns in Iraq and Afghanistan have bloodily and very effectively showcased the danger that explosives pose to even the most modern armoured military vehicles and equipment – and that threat is spreading. Today, no insurgency worth its salt is without its rocket propelled grenades or its improvised explosive devices (IEDs), and despite ISAF’s claim to a better than 50% record of detection and safe clearance, IEDs remain the Taliban’s favourite and most effective method of disabling fighting vehicles.

Against this backdrop, and with air portability and fuel reduction increasingly forming key priorities for modern armies, the race is on to develop new, lighter materials, to give fighting vehicles at least the same survivability as conventional rolled homogeneous armour (RHA) for significantly less weight.

The quest has recently seen major defence industry players Bae Systems, QinetiQ, Aigis Blast Protection, TPS, Permali Gloucester, MIRA and Sigmatex team up with researchers from The University of Nottingham in a collaborative project which could ultimately save soldiers’ lives on the frontline.

The venture – Lightweight Material and Structures for Blast and Ballistic Survivability (LiMBS) – was co-funded by the UK’s Technology Strategy Board (TSB), and as Simone Volpe, LiMBS founder member and consulting engineer at TPS, explains, it aims to harness advanced materials technology.

According to Volpe the goal is to develop multilayered, multimaterials that can provide enhanced resistance to the mechanical shock, pressure wave and physical impacts associated with a typical explosion, and which will ensure a minimal spread of spall fragments in the event that their integrity is breached. They also need to be cost-effective to manufacture, assemble and repair, while also being suitable for use in both new-build equipment and retro-fitting to older assets.

It is an approach which previous research has shown can offer better-than-RHA blast resistance, and now the team hope to take the idea further, taking a fibre composite backbone and augmenting it with judicious use of specifically tailored inter-layers to provide the necessary additional protection. In this way, the resulting hybrid material can be designed to give optimised shock dissipation, energy absorption and strain resilience in one package.

According to the consortium, after careful consideration, a wide selection of constituent materials were selected for evaluation, including Armox 370T (as a baseline), aluminium, carbon fibre, glass fibre, aramid and Tabreshield.

"The goal is to develop multilayered, multimaterials that can provide enhanced resistance."

Eighty centimetre-square panels made from various combinations were bolted into a steel test rig and then subjected to a moulded pancake charge of commercial plastic explosive, to investigate their blast resistance and ballistic properties. Keeping the aspect ratio of the charge and its distance from the panel constant, the quantity of explosive used was varied to determine the exact point of failure for each, which was taken to be when the panel was no longer gas-tight.

A range of instruments was used, including contact pins and strain gauges, to help evaluate the response times and strain rates for each of the composite materials, while an aluminium honeycomb ‘crush witness panel’ helped establish the gross dynamic deformation of the structures themselves. Further multilayer witness panels gave an insight into the incidence and extent of spalling when the structural integrity of a test panel was compromised.

Volpe says that overall, LiMBS has involved a unique combination of multiscale modelling, structural simulation, state-of-the-art manufacturing techniques and an iterative testing programme – and the project has already yielded some important outcomes to date. "The results of this are improved knowledge of impact, shock and high strain rate testing, composite damage and fracture mechanics, survivability and armour design, blast and ballistic effect simulations, materials behaviour characterisation and modelling of structural responses to dynamic events."

This alone could have major implications for the future R&D costs of the material. As researchers from the University of Nottingham, BAE Systems and QinetiQ pointed out in a joint paper to the 18th International Conference on Composite Materials, effective predictive modelling can help minimise the need for macro-scale explosive testing – something which they described as "often prohibitively expensive".

The work has also started to bring some of the potential military benefits that these next-generation materials could have into focus.

One of the most obvious of these is that lighter armoured fighting vehicles should be more readily deployable, especially when being air-lifted, which that could significantly enhance performance and response time, as well as potentially helping cut the fuel budget.

According to Volpe, the new material will be approximately 15-20% lighter than RHA. "A direct saving of fuel costs can be expected, though the amount of saving will depend upon many factors, such as system volume, and method of transport."

On the thorny question of its likely value to the ordinary soldier in terms of enhancing his / her likelihood of survival, however, he says it is too early in the research to estimate, but points to the novel material’s demonstrated ability to reduce flying spall fragments as a major advance in that direction.

A range of other uses

"One of the most obvious of these is that lighter armoured fighting vehicles should be more readily deployable."

Aside from its evident military value, and its potential uses in allied spheres such as security and personal protection, a wide range of other possible applications exist for a material which offers a lightweight alternative to structural steel, with very similar behaviour under high strain.

"Potentially [it] can be recommended for protection of hardened structures such as explosives storage facilities, aircraft shelters, bunkers and so on. Typical civilian industries that can be interested in the new material are oil, gas, petrochemical, nuclear and key civil infrastructures," Volpe says, with a number of commercial firms having already expressed an interest in using it.

The next phase will see the new material being used to create actual ‘products’ – and that will take the project into new waters again. "Products can have complex geometry," Volpe explains. "There will be challenges developing the appropriate manufacturing process."

Although it will clearly be some time yet before the technology becomes a regular feature of military vehicles, if everything goes according to plan, the chances of death or serious injury for those caught up in attacks involving any kind of explosive device should eventually be significantly reduced.