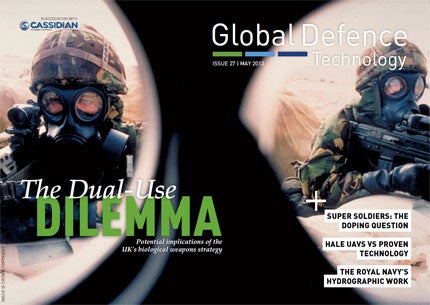 We investigate the potential implications of the UK’s Biological Non-Proliferation Programme, which supports research into biological agents that could potentially be used as weapons of mass destruction. We also take a look at the UK’s largest virtual soldier simulation exercise, and explore the use of performance enhancing drugs in the military.

Moreover, we explore the renewed enthusiasm for high-altitude, long-endurance UAVs and promising new designs, take a look at the Royal Navy’s hydrographic capabilities and how the data collected is used. Finally, we ask if the emergence of new Arctic sea routes will create new roles for the world’s navies.
To read your free copy of this issue, click here.

Super Soldiers
Lance Armstrong’s doping scandal blew the lid on performance enhancing drugs in sport, but opened the debate for other areas, including the military. Should soldiers be pumped with drugs to help them reach their peak?
Click here to read the full article.

Air Force:
Hail the Hale
High altitude long endurance (HALE) UAVs have emerged to an enthusiastic reception given their vaunted surveillance capabilities and existing technology could be repurposed for the same end.
Click here to read the full article.

Navy:
Charting the Seas
Despite the technological advances of the modern age, the Royal Navy’s hydrographic expertise is as important today as ever before. Global Defence Technology takes a look at the navy’s hydrographic role.
Click here to read the full article.

The Big Melt
As the Arctic Sea ice levels diminish, emerging sea routes could create new roles for some of the world’s navies.
Click here to read the full article.

Since the break-up of the Soviet Union, Great Britain has played a critical role in nuclear disarmament and non-proliferation. We find out why, at a time of defence spending cuts back home, it makes sense to maintain an active role in post-cold war disarmament.

We also look behind the Australian military’s plan to focus more strongly on the country’s mineral resources, ask why investment in portable power systems for soldiers is declining despite recent breakthroughs, and look at progress in DARPA’s research into insect-sized UAVs.

Moreover, we profile the US Navy’s research for a lightweight and swimmable next-generation diving suit, and take a look at Raytheon‘s vision for multilayered maritime defence.