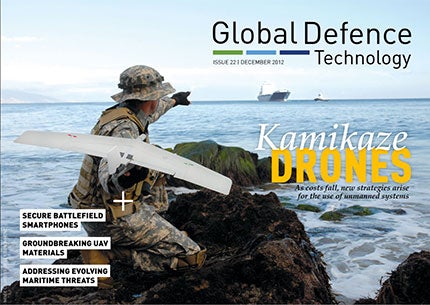 With a second term assured, US President Obama is set to tackle the daunting topic of Middle East relations. As Israel and Iran teeter on the brink of conflict, we investigate why the turbulent region is in desperate need of Obama's diplomacy.

We also find out how lower production costs allow for a new generation of kamikaze drones, ground robots and vessels built to destroy themselves as they hit their targets, and explore the latest technology for battlefield-safe smartphones.

Moreover, we profile new materials used to build future fighter aircraft, find out how international navies are responding to evolving maritime threats, and investigate the future of the UK's Trident programme.

Obama's Second Term: Diplomacy in the Middle East
With a second term assured, President Obama must approach the daunting topic of Middle East relations. Liam Stoker casts an eye on an increasingly turbulent region in need of diplomacy.
Click here for the full article.

Set to Self Destruct
Military robots can now be produced cheaply enough to have them crash into targets rather than engage them. Berenice Baker looks at a new wave of kamikaze unmanned aircraft, ground robots and vessels.
Click here for the full article.

Battlefield Smartphones
Technological advancements have thrust smartphones to the heart of the battlefield. Liam Stoker investigates the latest development in the pursuit of secure smartphones, including the re-emergence of the nett warrior programme.
Click here for the full article.

Material Witness
Research into new materials could result in super-light unmanned aircraft that can heal damage on the wing or charge batteries from exhaust heat. Berenice Baker investigates the innovations driving a new UAV generation.
Click here for the full article.

The War against Pirates
Despite high-tech naval vessels and countermeasures, piracy is spreading its area of influence. Berenice Baker asks Glen Forbes, co-founder of OCEANUSLive, how the pirate menace is changing.
Click here for the full article.

Replacing the Vanguard
A flurry of contract activity has reawakened the debate over the future of the UK's trident programme. Liam Stoker unravels the issues surrounding Trident and looks at plans to replace the vanguard-class submarines.
Click here for the full article.

The European Defence Agency is founded on the principle of pooling resources and knowledge, but its greatest benefit could extend beyond just conflict-ready interoperability.

We find out how EDA exercises help to establishing mutual trust and comradeship between participants. We also explore new technology that could enable soldiers to operate all the systems they carry with one hand, and look at the progress of biometrics for the battlefield.

We profile recent milestones in the development of unmanned systems, explore a cutting-edge power conservation system for UAVs, and find out why the US Navy's Littoral Combat Ship has come under criticism.