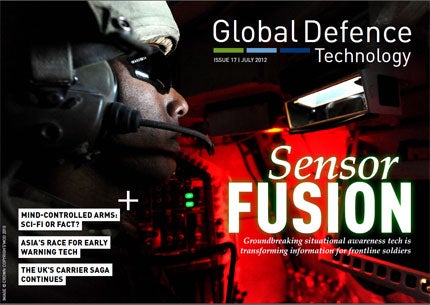 Weapons of Perception
Advances in neuroscience could offer the military the potential of mind-controlled weapons and performance enhancement. We find out if mind-control and extra-sensory enhanced warfare techniques could become a reality for future warfare or if it’s just science fiction.
Read the full article.

A Roadmap to Reform
Eco-efficiency is a continuing trend for armed forces across the globe. But with the global economic climate placing strain on resources, how can a nation’s armed forces keep an eye on costs and carbon emissions? We find out how the US Department of Defense plans to achieve a number of near, mid and long term goals to reduce the army’s reliance on fossil fuels.
Read the full article.

From all Angles
Situational awareness technology is saving lives by making sensor fusion information available to soldiers on frontlines. The software, called One Force Tracker , works on a standard iPhone, enabling soldiers to track the whereabouts of allies and adversaries on maps in real time.
Read the full article.

Entente Cordiale Eurosatory 2012-07-11
Collaboration was the buzzword at this year’s Eurosatory Land and Air Defence and Security event. We find out how defence ministries and manufacturers are looking to share costs and expertise.
Read the full article.

Back on the Radar
The US Air Force’s D-RAPCON system is back on track after recent budget cuts. Dr Gareth Evans reports on how the COTS approach to procurement revived the concept of deployable mobile air traffic.
Read the full article.

A Sixth Sense
Modern military operations rely heavily on controlling the skies, and effective airborne early warning and control (AEW&C) systems represent a vital component of aerial defence. Nowhere has taken this doctrine so much to heart as Asia, which is becoming the fastest growing market for AEW&C technologies.
Read the full article.

Carrier Catch Up
Controversial decisions on the UK’s Queen Elizabeth Class carriers have capped a flurry of aircraft carrier activity. We profile the latest developments in the world’s major carrier programmes.
Read the full article.

Naval Power
The debate over the rightful ownership of the Falklands has burst back into life. We examine the current maritime power of the British and Argentinean fleets of yesteryear with today to find out how military spending has shifted over recent years.
Read the full article.

Critical infrastructure protection has been one of the primary roles of armies throughout history. We investigate how our dependence on communication, transport and commodity networks is being threatened by new forms of warfare in the digital age.

We also investigate the UAE’s drive to join the international armoured vehicle market and explore the country’s Nimr vehicle range.

As trainee pilots benefit from ever more advanced flight simulation technology, we examine what the future will hold for flight tuition. We also find out how the increased need for security in littoral zones has seen smaller, faster and more agile patrol vessels grow in importance and popularity.