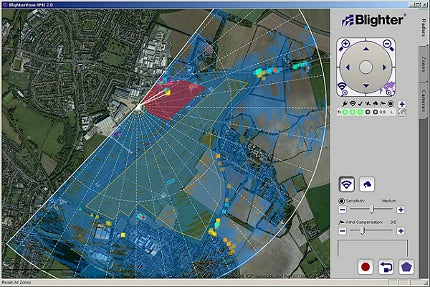 Think of a military forward operating base or a government facility, bristling with security and deterrents at ground level.

But what's to stop a commercially available micro or nano UAV flying low over the barriers or through a window, gathering intelligence with an on-board camera, or even delivering a small charge or chemical or biological threat?

Traditional air defence technology is aimed at big manned platforms moving fast. As well as being tough to spot with the human eye or using electro-optical systems, small, composite UAVs have a small radar cross-section (RCS), and as they fly slowly and at low altitudes they easily blend into surrounding clutter.

Turning ground radar to the skies

"What's to stop a commercially available micro or nano UAV flying low over the barriers or through a window."

British design consultancy Plextek believes it has come up with a solution. Realising that ground surveillance radar is already optimised to detect slow-moving targets against a cluttered background, company engineers had the brainwave to turn its gaze skyward.

Nicholas Hill, Plextek's director of defence and security, explains: "We internally developed a radar system called Blighter, designed for battlefield use. Lightweight and man-portable, you can pitch it up to provide perimeter security for your forward position. We're experimenting and tuning it to detect UAVs rather than things on the ground; it's already designed to detect people crawling along the ground, in other words small things moving slowly, just on the ground rather than in the air."

The concept is simple, and because a UAV defence variant would have to deal with less clutter than on the ground, it could be made more sensitive as part of efforts to optimise it for the new environment, even offering a level of target identification.

"As with all radars, you can get a signature which is proportional to the speed of the target," says Hill. "But if you've also got something moving on it, like a propeller or rotor, you can do some signal processing on it to tell if it's a single-engined winged aircraft or a helicopter, for example."

The radar bounces a signal off the target and looks not just at the signal coming back but also its frequency. An object moving towards the radar will have a slightly higher frequency due to the Doppler shift, which gives an idea of speed, for example.

A propeller or helicopter blade going round gives a fast modulation between fast and slow, which can be used to infer the signature of the target as well as its average speed.

From detection to identification

According to Peter Doig, business development consultant for Plextek's defence business, amalgamating the Blighter radar with other systems could deliver a complete end-to-end identification system.

"The radar bounces a signal off the target and looks not just at the signal coming back but also its frequency."

"Any given surveillance solution has a requirement for detection, track, recognition and identification of the target, so generally that's a multiple system, multiple technology solution," Doig says.

"The Blighter radar is one or two components of that; certainly detection and track, and a degree of general size and speed recognition using the audio stare mode. You probably couldn't get as far as identification of the platform, and recognising whether it was a threat or not. That's where you'd link in an electro-optical system, as we do with a ground surveillance radar, which is where the consulting arm of the business takes the lead."

Plextek has carried out an initial trial using an un-optimised ground surveillance radar and achieved a two kilometre detection range, on a 1.5m wingspan composite UAV. Having optimised the software, the company anticipates the next trial will demonstrate a range of five kilometres, potentially extending as far as ten kilometres.

So if a rogue UAV was detected, what should the response be? In a military environment, sniffer technology could pick up the comms channel the UAV is using and take control, or deny access and crash it into the ground. However, it might be more beneficial to use it to track, locate and apprehend the operator.

It could also be used with friendly UAVs at forward operating bases in combination with established ground surveillance radar, set up to detect crawling individuals or vehicle movement.

"If ground radar picks up that vehicles are leaving a compound they're interested in, the guys in the base can launch their hand-launched UAV," says Doig.

"At the moment that's way-point operated or hand driven, but if the convoy is several kilometres away and the UAV flies at 30 knots, it's going to take some time to get there after the vehicle and the men have moved. Using our solution, radar can pick up the vehicles and direct a UAV towards it, creating a closed-loop capability."

"lextek has carried out an initial trial using an un-optimised ground surveillance radar and achieved a two kilometre detection range."

The use of rogue UAVs in a civilian scenario isn't unprecedented either. According to Doig, during the recent meeting of the Bilderberg Group of influential individuals, a protester used a UAV to spy on who was attending the gathering.

There is also a potential civilian market beyond security applications, especially once UAVs get the all-clear to fly freely in shared airspace to replace potentially hazardous piloted activities, such as crop or power line surveys.

Currently in the UK small UAVS can only be flown with a dedicated license, within segmented airspace, or below a certain altitude and within line of sight, which is effectively 0.5km.

"If for example you have permission to do a trial in a dedicated area, instead of relying on the on-board GPS and a radio link we can put an electronic perimeter around the boundary, and set off an alarm if it strays outside," says Hill.

"If you lose the video link and you don't know where you are any more, you could also use the radar to fly it back towards you again as a backup system."

But for now, Plextek has got its sights initially fixed firmly on the defence market.

"We know that there is an MOD interest in technology to do this sort of thing if we can demonstrate that we've got a good system at the right price," says Hill. "Exhibitions like DSEI provide an opportunity to identify people who might be interested in taking on technology that we've developed and incorporating it into a product."

With Plextek successfully supplying the ground surveillance variant of Blighter to the UK MOD, it stands a good chance of persuading systems integrators to look to the skies too.

Freed from their tethers and from minute-to-minute human guidance too, today's robots are a far cry from their forebears.

Most military robots draw on mechanical models as a means of locomotion - tracks, wheels, fixed wings, helicopter rotors and propeller screws - but whole new groups of robotic agents are now evolving, inspired by the world of nature.

01 Dec 2020
Registration is disabled.
We use cookies to ensure that we give you the best experience on our website. If you continue to use this site we will assume that you are happy with it.ContinueLearn more