All clear: the onset of see-through armour
Menu

It has been said that one of the safest places to be during a war, let alone a battle, is inside a tank. As the faults of early armour designs have been ironed out, tanks and other armoured vehicles have become an incredibly effective battlefield tool, resistant to all but the most determined and specialised of anti-armour ordnances.

Still, the advantage of tank warfare – namely being encased in inches of nigh-impenetrable armour plating – can be a significant hindrance to operating crews. Any break in armour plating is a severe structural weakness that can be exploited, meaning viewing windows and periscopes have to be kept to an absolute minimum, making it difficult to navigate the surroundings. Sensors and camera systems have developed rapidly in recent years, but for many tank crews, opening the hatch and looking outside is still the most effective – yet most compromising – way to properly navigate terrain.

In a bid to address this vulnerability, sensor expert Hensoldt recently unveiled the Local Situational Awareness System (LSAS), a network of high-resolution cameras that observe the entire area around an armour vehicle, providing the user with as much information as if they’d popped their head out the hatch, while remaining safely enclosed inside the vehicle.

A ‘see-through’ tank: situational awareness from every angle

Hensoldt calls the system the ‘see-through tank’, as the resolution of the external cameras is on par with the human eye, reportedly providing crews with the same view as if the vehicle’s walls were transparent.

“The battlefield has changed over the last few decades,” says Hensoldt project manager for LSAS Marc Krause. “Currently we talk about the ‘urban canyon’ as a battlefield. Threats can appear from nearly every side or angle to the crew and the vehicle. To be aware of the situation you and your vehicle are in is crucial for survival. LSAS gives the crew the advantage of staying secure in the vehicle, getting the needed awareness and orientation of the situation around the vehicle in the same resolution as the human eye.”

A reliance on such advanced technology brings with it inherent advantages. Each sensor module is equipped with a high-resolution daylight camera, but also includes two uncooled thermal imaging modules. This means even in low-light or low-visibility environments, crews can orientate themselves to combat localised threats. Hensoldt claims that users can recognise a person up to 300 metres away, even at night.

The system works best when directly integrated into vehicle architecture, such as into the onboard battle-management system (BMS). “With this level of integration LSAS can not only provide live images from the outside to everybody connected (on demand), LSAS also can use data provided by the vehicle architecture and especially by the BMS to display these to the crewmember using the LSAS human-machine-interface (HMI),” Krause explains.

The system can also be used stand-alone by installing modules on the outside of any given armoured vehicle. This modular design allows for a degree of customisation, with additional sensors, such as a hemispherical camera, allowing for a vertical field of view, and acoustic sniper detection.

There were significant difficulties to overcome in the development of LSAS. While high-performance cameras were readily available to Hensoldt, the onboard processing of such a large amount of data at high resolutions is challenging. The human eye is much more efficient at processing images than typical camera technology, so cameras that look to replicate images in such high detail generate extremely large amounts of data.

There’s also the matter of operating the system. Developing an effective HMI for LSAS is all well and good, but every member of the vehicle crew already has a vital job to do, so any additional technology has to be as integrated as possible so as not to create additional tasks for crews. Helmet-mounted displays (HMDs) are one potential solution, similar to Elbit Systems’ IronVision HMD, which also allows onboard crews to overcome the visibility limitations of armoured combat. 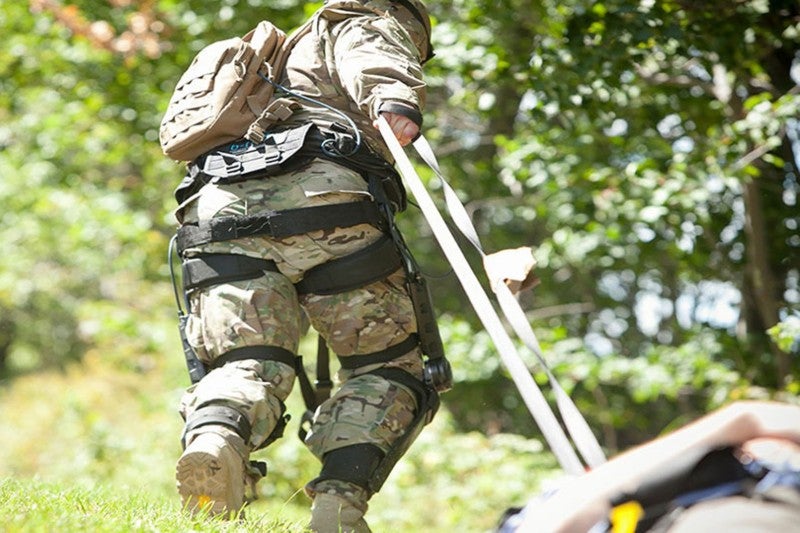 US Army trials exoskeletons for military use

Then there’s also the matter of security against both physical and cyber threats. Hensoldt claims that despite being an electronic system, the vehicle-integrated nature of LSAS means the only cyber threats faced are those shared by the general vehicle architecture. Physical threats, though, still pose a problem.

“Like every optical sensor, LSAS can be damaged physically. Therefore, we are working together with vehicle manufacturers to integrate the sensor module as well as possible to the vehicle structure and armour to reduce the possibility of physical damage,” says Krause. This could make reliance on such technology tricky, as by nature armoured vehicles are likely to be subjected to high-power explosive ordnance attacks that could render the sensor technology useless. LSAS was demonstrated at this year’s Eurosatory exhibition in Paris, and according to Hensoldt, main product development is now underway, with working prototypes planned for the end of 2019.