Robots are designed to carry out tasks humans either don’t want to or can’t do. Disarming and disposing of bombs is one of the most potentially hazardous professional activities out there, and matters are complicated even further when disposing of explosives on the battlefield. So designing drones in the 1970s to carry out this dangerous task was just a smart move.

Bomb disposal was one of the first practical applications for robotics, and since their implementation 50 years ago, bomb disposal robots have undergone a dramatic transformation – from the first Wheelbarrow units controlled with a series of ropes, to modern units using virtual reality (VR) and advanced sensory feedback.

“In the past 10 to 15 years, the amount of R&D and talent that’s associated with just the robotics field, in general, has really improved. Bomb disposal robots have really fed off of that,” says Ultralife Corporation application engineering manager Jonathan DiGiacomandrea.

“The pace at which these robots are improving has increased significantly. It’s really a rapidly developing field now. Robots in general are becoming much more precise and reliable than they were in the early days.”

Potentially the biggest difference between modern bomb disposal units and early models is the method of user control. Gone are the days of using ropes to manipulate the robot; now everything is remotely controlled. VR, as used by SRI International’s Taurus, gives operators an unparalleled view of the disarming scenario. It’s the closest a bomb disposal expert can be to the action without putting themselves in harm’s way.

Before the onset of VR, Taurus’s operators had to use a cumbersome 3D monitor, with specially designed controls that translate their hand movements to the motion of the robots’ graspers. With VR now readily available and taking the world by storm, the 3D monitor has been replaced by a VR headset and a simple pair of controllers purchasable with consumer models such as the Oculus Rift.

It’s easy to make comparisons to the technology used for playing video games, but the similarities don’t stop there. According to DiGiacomandrea, the remote controls used to operate many robot designs are increasingly being fitted with haptic sensory feedback devices, so they’ll vibrate to indicate warning signs – much like in gaming.

“And instead of using knobs and levers we’ve seen a couple of companies play with the idea of using VR gloves or at least VR interfaces,” he says. “In the coming years, I see VR really taking off as a way to control many different types of robot, but bomb disposal is a great application for it.”

Innovations in battery power supply have also meant that bomb disposal units can be designed much lighter – making them more portable – and will run for far longer without needing to recharge, meaning they shouldn’t break down at a crucial moment. 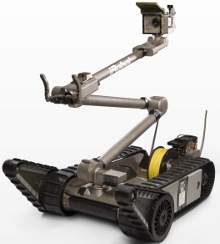 “Given the circumstances and the environment, battery failure could be catastrophic, but all too likely in hostile surroundings.”

“What we’ve found with all of our customers over the years, is that the power system is often-times the last part of the product that’s thought about, and at the same time we want to be the part of the product that provides the least number of issues,” says DiGiacomandrea. “We want it to basically be transparent – when you need power it’s there.”

In the past, robotics has relied on lead acid batteries, but recent advances in lithium-ion technology mean that the weight of batteries can be shrunk down by half or even two thirds, which will be vital as robots become lighter and more nimble while packing in twice the energy density.

And, of course, these batteries have to be as rugged as possible. Given the circumstances and the environment, battery failure could be catastrophic, but all too likely in hostile surroundings.

Current battery innovation is led by advancements in the electric vehicle space, which is where the biggest leaps forward in terms of energy density are being seen. “You’re going to see a continuous improvement in the power able to be supplied, which then allows robot designers to put more and more complicated and higher capability tools on to their robots,” says DiGiacomandrea.

While early designs allowed operators to neutralise explosives at a distance, the robots would still have to be deployed in sight of the bomb, on a relatively level plane. Advances in cameras and sensors have helped with the disposal of out-of-sight explosive ordnance, but the problem remains that the robot has to actually get there first. If a bomb is on the third floor of a building, for example, entering can be incredibly dangerous, let alone taking the time to set up the disarming and disposal device.

Thankfully, the last few years have seen significant advancements in the mobility and dexterity of bomb disposal robots. The University of Greenwich at Medway and NIC Instruments worked together in the mid-2010s on a robot that could climb stairs and open doors. New dextrous robots can now open car boots to disarm car-bombs. Boston Dynamics has tested robots that can fling themselves over walls to reach otherwise impossible environments; and they are now being considered for bomb disposal applications.

“Back in the day, they used to either poke or drag. Poke it until it blew up or was disarmed, or they would drag it away and blow it up somewhere else. What we’ve found recently is that people are moving to more complex ways to disarm these bombs. Really nimble interfaces that replicate human hands, or surgical style manipulators.”