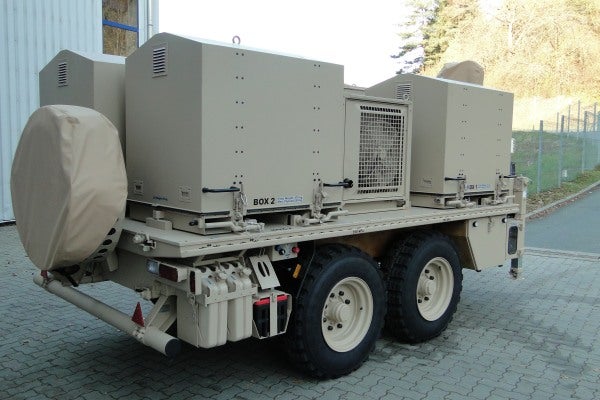 Geroh has handed over its MGS Trailer to Marshall Aerospace and Defence Group.

‘Just in time’ – the prototype of the MGS trailer was handed over to Marshall Aerospace and Defence Group. The trailer is part of the new ISTAR (Intelligence, Surveillance and Target Acquisition and Reconnaissance) ground control station to enter service with two Middle East armed forces. The whole system consists of the trailer and a Marshall shelter mounted on a military utility vehicle and contains ISTAR imagery interpretation equipment supplied by UTC Aerospace Systems. The system is a highly mobile solution able to keep up with deployable command centre.

The customised MGS Trailer has a gross vehicle weight of 14,300lbs, an overall length of 20.7ft and an overall width of 8ft. It is equipped with a high-capacity knuckle boom telescopic crane by FASSI (maximum load 2,200lb). The crane is needed to load and unload a mobile FISCHER PANDA generator (weight 1,430lbs) and three transport boxes with additional equipment (weights between 605lbs and 825lbs). Furthermore an additional non-removable 30kVA / 400V generator with approximately 2,420lbs is installed on the trailer platform to give the system its own integral power source.

Customised engineering and integration at its best.

The system passed all the required MIL-STD tests successfully and will entering the service in the first quarter 2014.