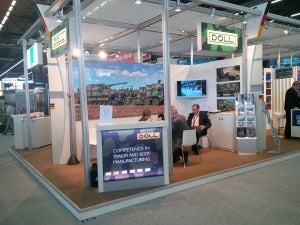 DOLL looks back on a positive participation in this year’s international military fair.

From 16 to 20 June, all the big names in the defense sector could be seen at Eurosatory in Paris.

An impressive image of a seven-axle HET of the German Armed Forces attracted the attention of many visitors to the booth of DOLL. During the whole fair, the DOLL employees on site were able to hold positive conversations. Especially the fact that DOLL counts the German Armed Forces among its key customers and the recently obtained certificate AQAP 2120 earned the company widespread esteem within the whole branch. Furthermore, important OEMs presented exhibits such as platform bodies of the 5 t and 15 t class which is one more indication for the high quality of DOLL’s military trailers.

All in all, the Eurosatory 2014 was a major contribution to a successful future concerning important tender offers and orders.