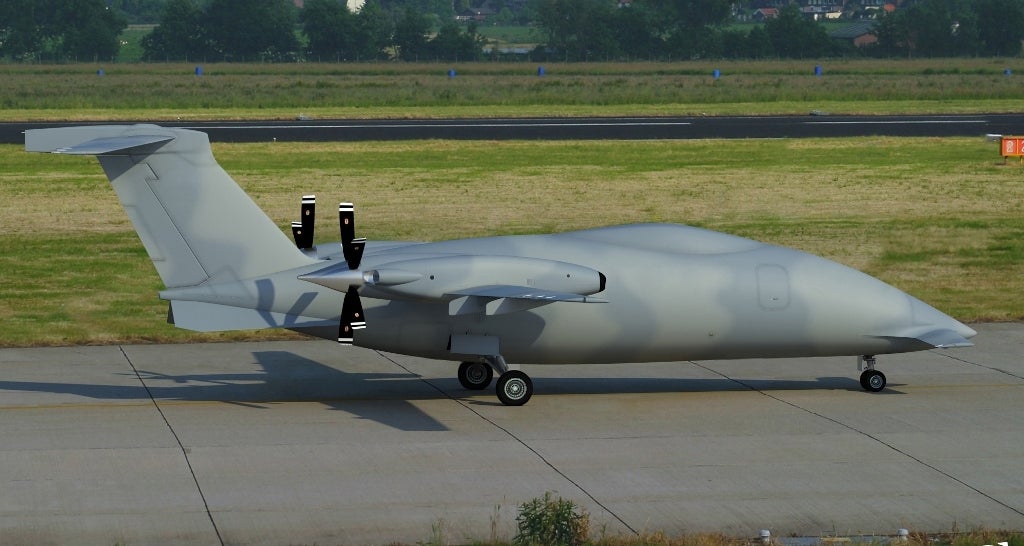 The P.1HH ‘HammerHead’ programme objective is the development of a multipurpose state-of-the-art UAS designed to meet the need for a robust and high-tech solution for intelligence, surveillance and reconnaissance missions (ISR). The Piaggio Aero P.1HH UAS includes an unmanned aircraft platform, specific mission equipment and systems and a remote ground control station (GCS).

After two years of development, the P.1HH ‘HammerHead’ UAV has been rolled out. It successfully completed its first engine start and runway taxi on 14 February at an Italian Air Force base. The Piaggio Aero P.1HH – UAS’s first flight is scheduled for this year following completion of the vehicle control and management system integration and ground test programme.

The Piaggio Aero P.1HH aircraft features automatic take-off and landing capabilities and is able to fly at up to 45,000ft, with an outstanding endurance of 16 flight hours. The Piaggio Aero P.1HH ‘HammerHead’ UAV will also be compliant with the STANAG USAR 4671 standards that enable it to fly both in restricted and unrestricted flight areas.

The P.1HH ‘HammerHead’ aircraft will be remotely controlled from a autonomous mission control ground station (GCS) by both a Line Of Sight (LOS) and Beyond Line Of Sight (BLOS) satellite communication system. The Piaggio Aero UAS features a state-of-the-art vehicle control and management system (VCMS) combined with a sophisticated air data terminal (ADT) and a customised mission management system (MMS) for the control of all mission specific equipment.

The P.1HH ‘HammerHead’ unmanned aircraft is powered by two Pratt & Whitney Canada PT6-66B turboprop engines, rated at 950 shp, and features newly designed, low-noise Hartzell 5 curved blades propellers. The propulsion system will be remote-controlled by an engine interface unit, which is part of the P.1HH VCMS.

"In today’s military, unmanned systems are highly regarded for their versatility for different roles and applications. Being ideally designed to perform at the highest, sensitive mission level in patrol , detection and reconnaissance environments, the P.1HH UAS will provide sophisticated stand-off capabilities for any surveillance and security need."

He added: "With the development of a new generation of multirole patrol aircraft and unmanned aerial systems, Piaggio Aero is creating its future, with the fundamental support of our world class shareholders, Mubadala Aerospace and Tata Ltd."

Piaggio Aero has selected Selex ES, a Finmeccanica company, for the development of the mission management system, the VMCS, air data terminal and the ground control segment for the Piaggio Aero P.1HH ‘HammerHead’ UAS. Selex ES has been selected as the Piaggio Aero UAS systems partner after an extensive international evaluation process.

"We are proud to have been selected by Piaggio Aero as partner in this unique and very ambitious programme that brings together the expertise of two leading Italian companies in the aerospace and defence domain," said Fabrizio Giulianini, CEO of Selex ES.

"This achievement rewards the effort and investment that Selex ES has dedicated to the development of key enabling technologies and know-how in autonomous unmanned systems. These are integrated into our SkyISTAR system solution that, after less than two years from its launch, is now securing its first customer. This programme is a step forward in bringing to market a truly European MALE ISR UAS."

Its mission management system, based on Selex ES’ skyISTAR innovative technology, will redefine the concept of patrolling and ISR missions, to encompass threats that range from terrorist attacks to illegal immigration, protection of Exclusive Economic Zones (EEZ), infrastructures and critical sites / infrastructures.

The characteristics of the P.1HH ‘HammerHead’ UAS will make it uniquely suited for a wide range of surveillance intelligence, reconnaissance and security missions and it will be developed by Piaggio Aero with a variety of operational capabilities according to individual customer requirements.

At IDEX 2013, Selex ES will be promoting its most advanced sensors and systems, including...

Building upon a wealth of experience and depth of knowledge, we blend a culture of...

SELEX Galileo, a Finmeccanica company, has been awarded contracts to supply InfraRed (IR) detectors to...