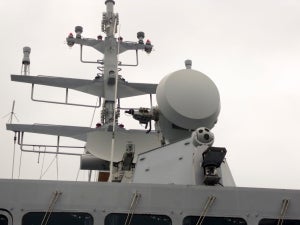 The sights will be installed on patrol boats operated b y the Armed Forces of Malta. The contract for the "Upgrade of Maritime Squadron Fast Response Craft" is part-financed by the External Borders Funds 2011 (EBF): 80% EU funds, 20% National Maltese Funds.

The Janus-N, derived from the successful Janus land sight, has been steadily gaining interest on the international market. It is currently in service with patrol units in the Italian Navy and used for day and night-time maritime surveillance.

Mauro Gori, SELEX Galileo’s SVP for Electro-optics, Land and Naval, said: "The Janus-N helps strengthen our customer’s surveillance capabilities and improves the situational awareness of those who are called upon to make decisions. I’m particularly proud of this achievement which demonstrates how competitive we are as a company, not just in the domestic Italian market but also in the international arena."

The Janus-N features a stabilised multi-sensor turret that contains a day (TV) camera, a night (IR) camera and a laser rangefinder to detect the distances of targets under observation. A console allows the operator to manage the various modes of the system and the open-architecture of the Janus-N allows it to be integrated with the existing command and control systems on-board the ship.

At IDEX 2013, Selex ES will be promoting its most advanced sensors and systems, including...

Building upon a wealth of experience and depth of knowledge, we blend a culture of...