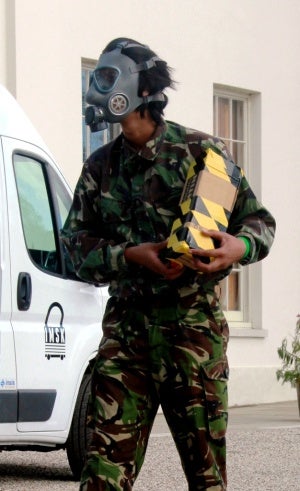 SELEX Galileo, a Finmeccanica company, is today leading a demonstration of IMSK (Integrated Mobile Security Kit), a European Union project that enables security teams at highprofile events such as economic summits to deliver improved security through the provision of improved situational awareness.

The company will lead a team of 26 partner organisations during the demo, utilising the best of European industry to deliver a live simulation of an EU summit at Hylands House in Chelmsford, Essex. The team includes international defence and security primes as well as small and medium sized enterprises and academic institutions.

IMSK takes a common message protocol approach to make sensor integration rapid and easy. This means the system can utilise both existing surveillance assets, such as CCTV cameras, as well as cutting edge technologies. The end result is a cost effective system that can deal with the latest threats with minimal risk to the operators.

At the event new and novel technologies include a sniper detection system that spots threats before shots are fired by scanning for the reflection from a sniper scope (and which can also detect any other scope, such as high power camera lenses), equipment that can detect traces of explosives in real time without having to send a swab back to a lab for analysis, and a radar that can see through walls.

For the demo, SELEX Galileo will contribute their Mobile Surveillance Unit (MSU) utilising the new message protocol to bring ‘plug and play’ to the surveillance world. Its sister company, SELEX Elsag, is providing the mobile communications vehicle which provides a wide range of dedicated communication systems, from WiFi and 3G up to satellite communications;ensuring critical information can always be shared when required.

Jan Kavlemo, representing the Swedish National Police Board and acting as advisor during the demo said: "It’s important to see the system work in real life. Hylands House is a typical location for this kind of event and we’re going to demonstrate the system using live actors – for example we’ve hidden a sniper in the bushes facing the house. Several different systems will work together to help blue light forces do their jobs".

Jeremy Carr, managing the project for SELEX Galileo said: "IMSK will provide security teams with a highly mobile and rapidly deployable response to changing threats. By partnering with other organisations to develop a common message protocol, we’re able to integrate a huge range of exciting new and existing technologies to give the public and VIPs the best possible protection.

"IMSK doesn’t replace the need for security teams, but enhances their ability to provide protection and respond effectively in the event of an attack."

Building upon a wealth of experience and depth of knowledge, we blend a culture of innovation and a broad spectrum of technologies to engineer flexible...