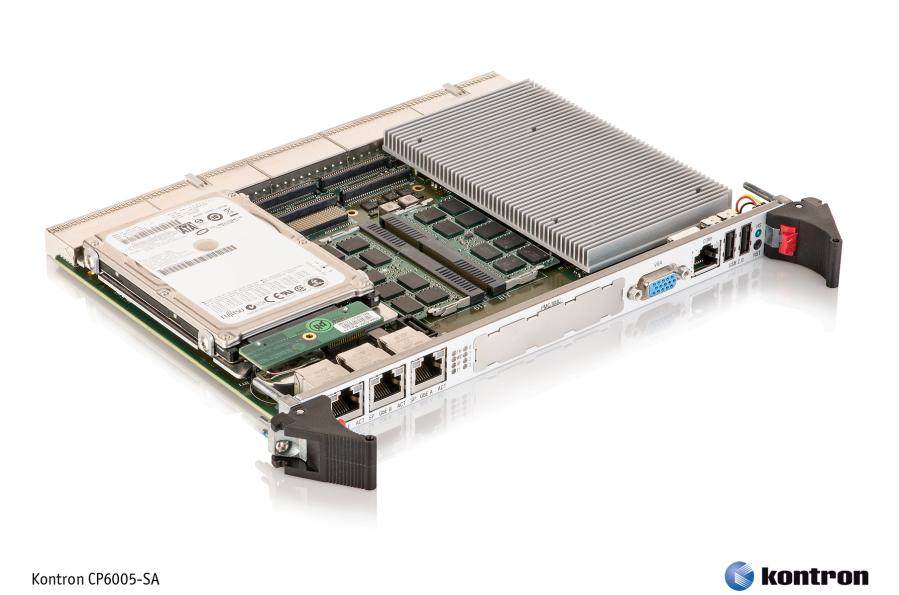 Kontron has introduced its latest 6U CompactPCI CPU board alongside the launch of the fourth-generation Intel Core processors.

The Kontron CP6005-SA, featuring the Intel QM87 Express chipset, is scalable up to the Intel Core i7-4700EQ processor with up to 4x 2.4GHz (3.4GHz in turbo mode). The CPU board excels with its outstanding performance density and data throughput over the backplane.

While keeping to the same TDP and footprint, in comparison to preceding generations, the new CPU board offers up to four times more GFLOP per watt, up to 15% higher CPU performance and double the graphic performance.

In addition to Kontron’s legacy CP6005-SA, the Kontron 6U CompactPCI CPU board CP6005X-SA offers significantly improved data throughput over the backplane due to PCIe 3.0 and 2x 10 Gigabit Ethernet. Thus, the new Kontron 6U CompactPCI CPU board primarily targets compute-intense applications such as sonar, radar and video stream analytics in commercial avionics and military. Further application areas can be found in markets such as telecommunication and medical image processing.

New features such as the Intel Advanced Vector Extensions 2 (Intel AVX2) and the extended GPGPU support prove to be particularly advantageous for high-performance embedded computing.

With the Kontron CP6005-SA, OEMs can now attain DSP performance density with generic x86 technology. By using established and standardised APIs such as DirectX11.1 OpenGL 4.0, OpenCL 1.2 and Compiler support for GPGPU, OEMs can develop high-performance applications much faster and with more flexibility.

In the case of existing applications having to be upgraded, OEMs benefit from minimal re-design work thanks to the rear I/O compatibility to previous Kontron 6U CompactPCI CPU boards, such as Kontron’s CP6004-SA, CP6003-SA, CP6002, CP6001, and CP6016 along with end-of-life (EOL) CP6012 boards.

Product samples of the Kontron CP6005-SA are now available, with full production scheduled for Q3 2013.

When it comes to high-availability applications, out-of-band communication via IPMI (Intelligent Platform Management Interface) fulfils the highest expectations in terms of system management and information. Data security is guaranteed with up to 16 gigabytes of energy-efficient DDR3L memory ECC and Trusted Platform Module (TPM 1.2). Application-specific I/Os can be integrated via XMC/PMC modules.

Owing to its extensive interface range, the Kontron 6U CompactPCI CP6005-SA CPU board ensures maximum flexibility for a wide variety of application scenarios. The range includes six SATA ports with RAID 0/1/5 functionality for improved data security, six USB 2.0 ports, two RS232 ports, three independent graphic interfaces (1x VGA, 2x DisplayPort/DVI/HDMI) for resolutions of up to 4K and High Definition Audio (HDA) interfaces as well as five Gigabit Ethernet, plus two optional 10GbE to serve complex networking topologies. A SATA 6Gb/s port can be used for an onboard 2.5in SSD or HDD.

Flash-SATA modules with up to 64 gigabyte can be integrated to capacitate operating systems and application data, which significantly improves system speed and availability and can be optionally write-protected.

Product samples of the Kontron CP6005-SA are now available, with full production scheduled for Q3 2013.