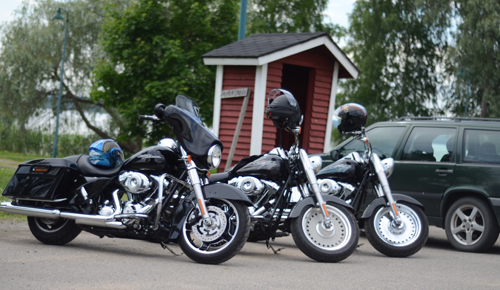 It was a Sunday just after Midsummer when David, Howard, and Sami took off to the Harley Davidson store in Vantaa, Finland. They came out with three brand new monsters, grabbed a few friends and headed out north towards Jyväskylä, with a support car with Marko and his son Kapu on board.

Their first impressions: the weather was warm, not too humid, everything was in bloom and the forests, spotted with lakes, were breathtaking. This was a running theme throughout the trip.

On the first day, the road took them towards Jyväskylä through the scenic routes in central Finland. However, the heat of the day had warmed the tarmac to such degrees that the rear tire studs from Sakke’s high horse had melted off. ‘Mr. Hightower’ then had to stay in Jyväskylä to replace the tire as the rest of the team started their ride for the second day.

Monday morning saw two more riders rolling down from the north. The two groups merged just above Kuopio on the 9-road towards Joensuu. They rumbled through Tuusniemi for lunch, where Sakke caught up with them.

Next stop was the beautiful and peaceful Heinävesi Monastery, which saw the group with altogether nine bikes sweating in the heat of the day. Apparently the connecting point between monks and motorcyclists is that both wear black and get quite hot in the sun. We left the monastery to recover from our bikes’ roar and took little winding roads back towards Jyväskylä.

In Jyväskylä, the group discovered the next lost tire: Sami’s HD had burned through the rubber, leaving the tread on display. The road had taken another toll, and he had to catch the posse later on. The Jyväskylä spa hotel gently took care of the tired riders, and after a hearty meal in the deserted restaurant, we were ready to nod off.

On Tuesday, the entourage filed out in a formation that was better than ever. Heading south-east on the road no.13, the first part of the day passed by fairly uneventful. But when the team hit the smaller roads, the views grew more and more spectacular by the kilometer. The road 62 proved to be an unforgettable ride, with high bridges and gleaming lakes on either side the winding track. The kilometers rolled by with joyful smiles, only to land the group in Savonlinna where Sami caught up with them.

After the necessary work-related banter, the evening found them stretching their legs, strolling for dinner and taking in the sights around the Olavinlinna castle. A lengthy dinner and some geocaching later, it was time to get some hard-earned sleep.

Bright Wednesday was even hotter than the previous days, and the riders slowly melted in their Gore-Tex gear. Despite the roasting conditions, the group stopped for a bite of lunch in Mikkeli, where they stumbled upon a war-era communications centre, now remodeled into a museum.

Some photos and geocaching later, the riders rumbled on towards the eastern border. Driving made the heat more bearable as they passed an endless line of trucks waiting for the crossing. The last bit of the day got some excitement when the riders hit the King’s Road spanning from the eastern border, all the way to Turku, the old capital. The King’s Road is a museum road, weaving through meadows, fields and woods. Needless to say, the bends kept the group wide awake and alert on the way to Pyhtää, the last stop.

In Pyhtää, there was a small B&B style residence called Patruunantalo, blissfully empty save for the gang. An interview and a photo session later, dinner was served. The old factory site still houses several impressive buildings, a bird sanctuary and a hydroelectric plant. Close by sits one of Finland’s oldest stone churches, dating from the 1400s. Sightseeing and sauna guaranteed drowsiness as the last day of the journey crept up on the group.

On Thursday, the group bid each other goodbyes. Sakke, Pekka, and Eeva headed for the long journey back north and the rest headed for the capital and Tampere. The sweltering heat finally reached breaking point, and southern Finland got the much-anticipated thunderstorms. The north-bound trio managed to ride the majority of the approximately 600k ahead the thunderclouds, and got home relatively dry.

In the aftermath of this trip, Codenomicon was featured in the biggest newspaper in Finland with a full-spread story on Howard A. Schmidt as the new chairman of the board.

Codenomicon will be attending or exhibiting at a number of industry events in the months...

Sami Petäjäsoja about Codenomicon in Asia