TSS International BV, based in the Netherlands, are experts and world leaders in civilian and paramilitary vehicle safety solutions based on enhanced security through mobility. These solutions include, but are not limited to explosion-suppressant and self-sealing fuel tanks.

Convert your existing fuel tank into a self-sealing TSS ProtecTank®.

The fuel tank is a crucial and vulnerable part of your armoured vehicle. It is the source of the engine’s power, as well as a possible explosion threat when shot at, due to the low flashpoint of its contents.

To maximise the potential and minimise the dangers of the fuel tank, an existing fuel tank can be turned into a self-sealing TSS ProtecTank.

A TSS ProtecTank can be equipped with a specially developed fuel-swellable foam. This coating limits leakage to a few drops when the fuel tank is punctured or shot at. Protection is provided against all handguns, including: 3.57 Magnum, .44 Magnum, 9mm NATO, 7.62 AP and 5.56 NATO ammunition. A TSS ProtecTank makes sure the fuel stays in the fuel tank, where it is protected from fire and explosions. Also, fuel that is in the fuel tank is fuel that can be used to get away from a dangerous situation.

All self-sealing fuel tanks incorporate a number of layers of Kevlar®, Twaron® or Dyneema® under a special protective polyurethane flame retardant outer coating. This outer coating is resistant to numerous chemicals. The combination provides protection from the threat of 12.7 and 14.5 gauge machine gun ammunition.

The self-sealing modifications can be applied to existing fuel tanks made of steel, stainless steel or HDPE. 90% of all conversions can be made on original OEM fuel tanks. TSS International can also offer tailor made fuel tanks, according to customer specification.

In a fuel tank, the empty space above the fuel level (known as ullage) often contains a volatile mixture of fuel vapour and air. It is this ullage area that is most susceptible to explosion. Since liquid fuel itself does not explode, a completely filled tank is far less likely to explode than one that is only partially filled.

Obviously, the lower the fuel level in the tank, the greater the amount of explosive vapour present when an ignition source occurs (perhaps from a spark). This ignition creates a ‘chain reaction’, as the ignition or ‘flame front’ gets larger and moves faster as it propels through the vapour. The rapid ignition of the flame results in an ever-growing compression wave in front of it, compressing the un-ignited vapour. This is what gives an explosion its power. This sequence occurs in milliseconds.

This Safety foam prevents the abovementioned chain reaction from occurring. Instead, vapour ignition is confined to the area immediately around the ignition source. Flame and wave expansion are halted by the foam, which prevents a possibly catastrophic explosion.

The capacity of the fuel tank is reduced by only 3% of its maximum volume, whilst giving 99% protection from explosions.

Filling the fuel tank and distribution of the fuel are not adversely influenced. Instead of retaining fuel, the explosion suppressant Safety foam passes the fuel at a controlled rate predetermined by the size and structure of the strands.

SAFETY AND SECURITY ON WHEELS

Avoid the danger of explosions and have TSS explosion-suppressant and self-sealing fuel tanks fitted to your vehicles.

TSS-converted HDPE fuel tanks have been tested and approved by the independent Beschussamt in Ulm, Germany, of which the full report is available in German and English, from TSS International’s website: WWW.TSSH.COM/.

TSS International also provides several mobility solutions. Among others, Heavy Duty Wheels, Big Brake Kits, Intercom systems and Runflat Systems for armoured vehicles. Several TSS products have been tested and approved by TüV in Germany and all runflat systems comply with the Finabel 20.A.5 and/or the A.20.A standards. 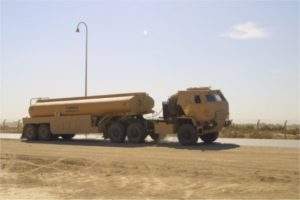 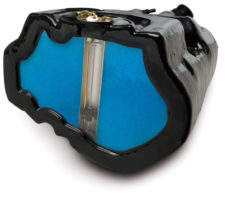 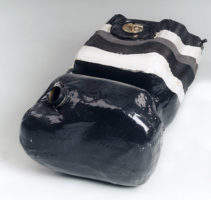