ADM DMO/Industry Team of the Year Awards are Announced 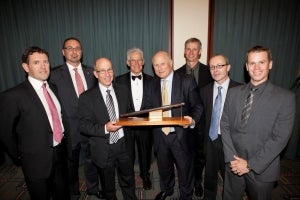 A range of SMEs and primes were recognised for their work in 2012 at the ADM 2013 Awards Dinner held in Canberra at Old Parliament House on Tuesday 12 February 2013. The ADM/DMO Industry Awards recognise excellence in the level of collaboration between DMO and industry teams.

The prestigious Essington Lewis Trophies were this year awarded to:

Major company: Thales Australia and AFVSPO for the Prime company category SME: 11 industry teams and the Joint Project 154 Phase 3A team narrowly beat the Mediaware entry for the SMEs

The eleven partner companies are:

The four sub contractors are:

The defence customer was:

The industry team was able to deliver a complex, high technology counter-IED solution to a serious frontline problem the ADF was facing using MOTS and COTS technology in a tightly compressed timeline. The teams are commended on their in-theatre introduction and support efforts in Afghanistan by both parties.

The awards are held annually and are managed jointly by Australian Defence Magazine (ADM) and the Defence Materiel Organisation (DMO). The intention of the awards is to honour outstanding achievement between industry and the DMO in delivering materiel solutions.

The awards are conducted in four categories:

The winners of each of these categories are then eligible to be considered for the ultimate prize of the Essington Lewis Trophy.

Mr Essington Lewis served as managing director of BHP (now BHP Billiton) from 1926 to 1938 when he assumed the post of chief general manager, which he held until 1950. Concurrent with those roles Mr Lewis was director general of munitions from May 1940 to June 1945 and also director general of aircraft production from January 1942 until June 1945. Mr Essington Lewis was largely responsible for the rapid escalation in Australia’s military manufacturing capability at a time when the country was under imminent threat of Japanese invasion during World War II.

The trophy consists of a Pattern 1907 Sword Bayonet made at the Lithgow (NSW, Australia) Small Arms Factory during WWII. This bayonet fits the Short Magazine Lee Enfield MkIII .303 rifle, which was Australia’s standard issue service rifle during both World Wars. Over 400,000 rifles and bayonets were manufactured in Australia during WWII.