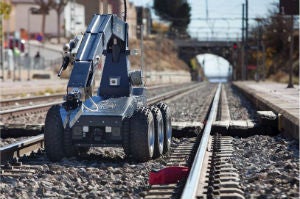 At the end of June, Proytecsa Security will deliver five of its Aunav.EOD robots, which are specialised in CBRN (chemical, biological, radiological and nuclear) defence, to the Saudi Arabian Civil Defense Corps.

The robots have been designed to prevent and neutralise CBRN threats and will be used by the civil defense unit of the Kingdom of Saudi Arabia.

The Aunav.EOD robot has a wide variety of skills and can be used to perform different tasks such as counter improvised explosive device (C-IED), explosive ordnance disposal (EOD) and CBRN.

The medium-size robot is highly sophisticated. It has the ability to lift objects and its high precision enables it to respond correctly to risky situations in which explosive devices, car bombs or any kind of CBRN threat might be involved.

Beside its main features, the robot has radiation detectors to find any radioactive material in its surroundings. The remote control robot integrates the telemetry so its data can be seen in real-time from the master unit.

The aunav.EOD robot is fitted with a crane arm, which has been specifically designed to pick up barrels. It is also supplied with a tailor-made container that is able to store and transport any suspecting radioactive materials or samples for analysis, while eliminating or reducing the level of radiation. The robot is designed to allow its own decontamination after the process.

This supply allows Proytecsa Security to remain the leading supplier of C-IED, EOD and CBRN robots in the Kingdom of Saudi Arabia, where the aunav.EOD and aunav.MEGA robots are currently in service in several security corps.