PROYTECSA SECURITY aunav.EOD robots will be used on prevention and Counter IED purposes in the Republic of Cameroon - Army Technology
Menu 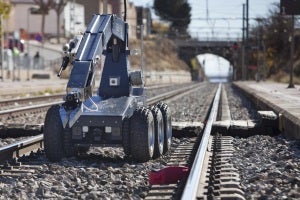 PROYTECSA SECURITY company will deliver its aunav.EOD robots to the Republic of Cameroon authorities, whom had selected these explosive ordnance disposal specialised robots by international tender.

These authorities have relied on PROYTECSA SECURITY for the prevention and C-IED (counter improvised explosive devices) measures through the acquisition of these aunav.EOD robots.

PROYTECSA SECURITY international sales director, Raoul Dominguez, said, "This sale will allow us to keep on moving though the internationalisation strategy of our company, we have gone from making 25% of the sales in exports to 75% for the year 2013."

The aunav.EOD robot was developed in collaboration with the Spanish National Police Force and EOD units to fight terrorism. This robot has been used by several Spanish law enforcement agencies since 2003 such as the national police, the civil guard, the army, the air force and the Catalan Police Corps. Thanks to its efficiency and reliability, as time went on the number of customers that use our robots has increased to countries like Angola, Chile, Morocco, Mexico, Saudi Arabia, the United States of America, and Vietnam, among others.

The aunav is a highly sophisticated, medium-sized robot designed for explosives disposal. Its enormous capacity to carry weight combined with its high precision allows bomb disposal experts to respond effectively when facing situations involving CIED and EOD activities. The prototype that is used more often by the police authorities in operations involving explosive devices is this aunav.EOD, which is the only one of its type able to lift more than 250kg and has a dragging capacity of up to 800kg, combined with a pin-point precision and a force of more than 70,000 Newton in its gripper. Its size allows it to go through doorways 70cm wide.

This deal allows PROYTECSA SECURITY to export to the Republic of Cam-eroon for the first time, as well as including it as a reference on the list of aunav series robots customers.