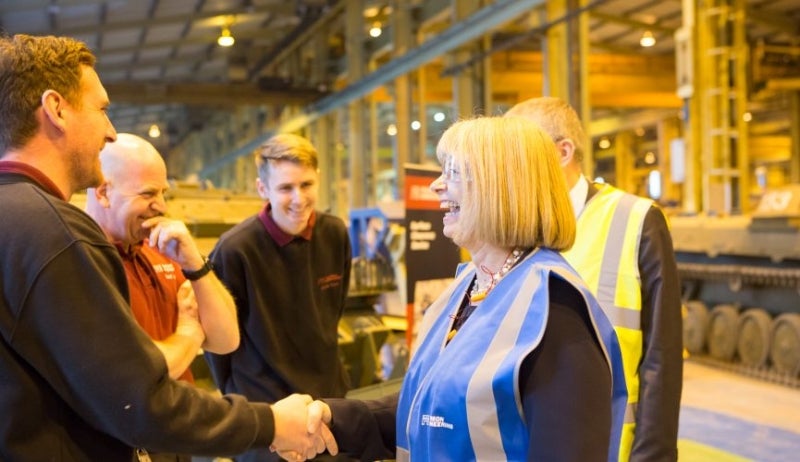 Pearson Engineering, providers of combat engineering and mine clearance systems worldwide, had the privilege to brief Minister for Defence Procurement Harriett Baldwin MP on 9 February. This came as part of an NDI event hosted by Pearson Engineering’s Managing Director Craig Priday, in his role as Chairman of NDI’s advisory board.

NDI works to amplify the needs of member companies operating across defence, aerospace, space and security on a national and international scale, to develop business development opportunities and to bolster the UK’s supply chain across these sectors.

The event was attended by twelve participating companies and provided an opportunity to discuss with the Minister shared growth objectives for the sector in support of the Government’s recently announced Industrial Strategy Green Paper and the Prosperity Agenda.

The Minister’s participation in the NDI event provided Pearson Engineering with the opportunity to discuss international trade deals crucial to the company’s success as exporters of counter-mine and counter-IED equipment from its Pearson Engineering and MineWolf brands in support of defence, peacekeeping and humanitarian work worldwide.

Furthermore, Pearson Engineering was able to brief the Minister on its ‘ready to mobilise’ stance as contenders to provide manufacturing services in the planned procurement of a new fleet of 8×8 mechanised infantry vehicles for the UK.

Pearson Engineering championed UK content, the retention of essential skills and the role of SMEs in the UK’s defence manufacturing industrial base in readiness for future opportunities.

The Minister was briefed on Pearson Engineering’s ability to provide strategic advantage to the vehicle OEMs competing for the MIV programme. Their involvement with Pearson Engineering would bring investment into the UK’s manufacturing sector and support growth in the region. This latter point supports recent drives to enhance industrial value chains throughout the country, particularly in the North East.

An article published by the UK Government read:

‘As the Ministry of Defence (MOD) is aiming to increase the share of its contracts with SMEs from 19% to 25%, the Minister led discussions with 12 companies in the Northern Defence Industries trade group (NDI) on how defence and businesses of all sizes can work together. In particular, they looked at how to grow exports, drive innovation and support the UK supply chain.

Minister for Defence Procurement Harriett Baldwin said: "The North East makes an important contribution to our national security and economy. From the Ajax armoured vehicle to our new carriers, the companies I’ve met are delivering the equipment and services our Armed Forces need to keep Britain safe.

"Here in Newcastle today, we looked at how the businesses based here can help make Britain one of the most innovative, most prosperous countries globally, for an economy that works for everyone."

The Minister’s SME roundtable was hosted at Pearson Engineering’s cutting-edge Armstrong Works in Newcastle-Upon-Tyne, which reopened in 2015 following a £20 million refurbishment. It is a great example of the invaluable role that northern small and medium-sized Enterprises (SMEs) are playing in the defence supply chain.

Managing director of Pearson Engineering and chairman of NDI Craig Priday said: "It has been a pleasure to welcome the Minister for Defence Procurement to Pearson Engineering today, particularly at a time when the MOD is in the process of renewing its industrial policy.

"NDI’s member companies make an enormous contribution to the capabilities of our armed forces and it is reassuring that the department is taking the time to consider the views of the UK defence community right across the supply chain as it formulates its future intentions in this regard."

NDI Director Andy Collier said: "This has been a great opportunity for MOD to engage further with the UK supply chain.

"This sort of engagement is crucial to ensure that MOD can establish the means through which we, as an industry, can work ever more closely with the department in the best interests of the UK economy."’