Yugoimport-SDPR produce and supply equipment and armaments, as well as offering technology transfer capabilities and the construction of defence infrastructure. 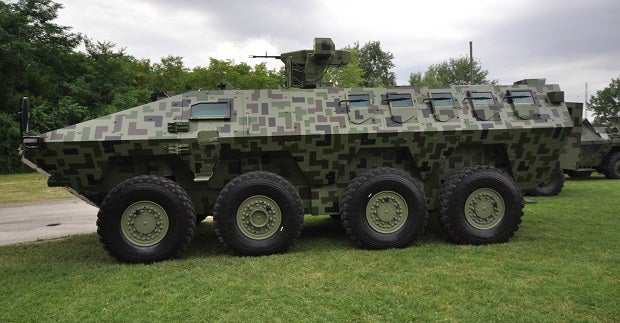 Yugoimport-SDPR produces and supplies equipment and armaments, as well as offering technology transfer capabilities and the construction of infrastructure to the defence industry.

Yugoimport-SDPR has been successfully building relationships with its business partners, attending to their specific requirements, and providing training, maintenance and overhaul services, as well as spare parts.

The company’s professional approach has made it possible to maintain close relations with a number of companies, mainly from the Far and Middle East.

Yugoimport-SDPR focuses on the development and production of complex combat systems, recently releasing the wheeled gun-howitzer NORA-B/52cal. 155mm with the 52cal. barrel length.

The LAZAR 2 8x8 MRAV is a multi-role armoured vehicle family. The vehicle features extremely high-mobility, ballistic protection up to STANAG 4569 V standard, high-protection from mines and IED and a turret-weapon station armed with 30mm gun.
Lazar 3 is an armoured 8x8 wheeled vehicle designed for various applications and missions. The power train is accommodated in the front right-side of the vehicle in a protected space completely separated from the crew. The central transfer case transmits the torque to all wheels that have independent suspension and provide for the vehicle’s high-mobility. All the shafts provide power, while the first two steer the wheels.
The NORA-B52 155mm self-propelled gun-howitzer is designed to provide fire support to own units. Fire support is achieved by powerful, sudden and rapid fire against tactically, operatively and strategically significant targets at greater distances.
The Multirole Patrol Boat is a high-performance craft designed for a wide range of police and internal security activities, including anti-terrorist, anti-guerilla and anti-piracy tasks, and for a number of military operations such as special forces landing missions and transport of divers.
The Sova aircraft is suitable for primary, VFR, IFR and night-flying pilot training, primary aerobatics and gliders and banners towing.
represents a complex project for infantry soldiers. Ballistic protection and combat resources offer a high-level of survival in enemy territory.
The Morava is a self-propelled multitube modular rocket launcher and is capable of launching numerous different missiles, regarding caliber or range. Its ombat range is up to 40km with GRAD-2000.

The company has also invested significant funds to improve the business processes of several Serbian defence companies, in order to make jointly market-oriented and technically competitive products and services.

Transfer of defence engineering and technologies

The transfer of defence technologies and the construction of defence infrastructure facilities represent the commercially most important and most complex fields of Yugoimport-SDPR’s activities.

The comapny has taken part in the transfer of technology and construction of factories for small arms production, semi-automatic and automatic rifles, artillery weapons and sighting devices, small arms ammunition, powders and explosives.

The projects were implemented on a turnkey basis, for instance factory designing, construction of facilities and installations, integration of technological equipment, factory commissioning, and provision of technical assistance and personnel training.

Yugoimport-SDPR has more than 60 years of experience in the international defence market.

Yugoimport-SDPR’s business strategy includes recognising the current and long-term requirements of the armament and defense equipment market and integrating the technological and manpower possibilities of the Serbian defence industry through multimedia presentations of the company’s product range.

Yugoimport was founded on 27 June 1949, with its primary goal being to import parts, row materials and intermediary goods for the the domestic defence industry. In 1953, Yugoimport startedto export their products.

The period between the 1950s and the end of 1980s is characterised by an intensive in-/indigenous development of a wide range of defence products for all three army services, which had increased the potential offer both in its content and scope.

During the 1980s Yugoimport-SDPR, alongside its business partners, was one of biggest exporters in Yugoslavia, registering billions of dollars of revenue from export in the foreign trade balance of the country.