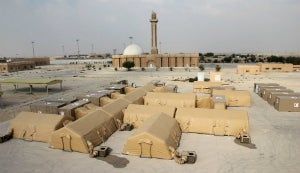 As part of Dantherm’s defence globalisation strategy, its range of air conditioning units is currently being expanded with 60Hz versions.

To serve the markets in South and North America, where the 60Hz electrical system is predominant, Dantherm can now offer the ACM 18 standard for 3 x 208VAC/60Hz.

The first prototype has been developed, produced and tested by our engineers and workshop staff. The tests were all successful. We can guarantee that the unit has the same excellent performance as the 50Hz version.

We have already received our first order for the ACM 18 standard 3 x 208V/60Hz unit, which will be available from March 2013. Our customer has won a project for a series of complete mobile camps for the army in a South American country and Dantherm was chosen as supplier of the HVAC products. The first camp will be put into operation in April 2013.

Dantherm is happy to be able to support our customers in South and North America and Saudi Arabia directly, as well as our European customers who are bidding for projects in these emerging markets. At the moment the ACM 18 CBRN and ACM 5 MK I (1x208VAC) are also available for 60Hz operation.

From 8 to 11 September 2020, Dantherm will be showcasing its range of field-deployable heating...

Are you looking for portable air conditioning for clean room solutions in your field camp...

In November 2019, renowned DSEI London will be hosting a large defence and security exhibition...