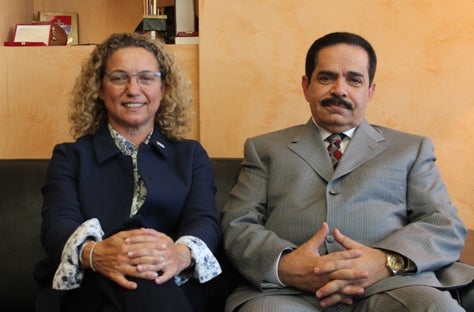 ARPA is celebrating the 50th of the company, founded in 1968 by Mr. Antonio Arpa Romero. Because of this, authorities and international representatives of the sector have visited the facilities, which have been located in La Muela since 2002.

Among them, ARPA has counted on the presence of the President of the Government of Aragon, Javier Lambán; members of the Ministry of Defense; representatives of the Logistics Brigade of the Spanish Army; the Spanish Armed Forces and Air Force generals; as well as members of Zaragoza’s Defense General Hospital, to name a few.

As a finishing touch to the events that have taken place during the last few days, on Friday 5 May, a delegation headed by the General Director of the Saudi Arabian Ministry of Defense Medical Services, General Sulaiman Almalik, have visited the Spanish company. As a result of the collaboration with this country, in the last two years ARPA has supplied them seven field hospitals.

Delivery Act Of The Certificate ‘Ambassador Of The Army Brand’

Clara Arpa, CEO of Arpa EMC, has recently been elected president of the Spanish Global...

The Assembly of Members of the Spanish Network of the Global Compact has chosen in...

ARPA is Leading the Transition Towards Sustainability