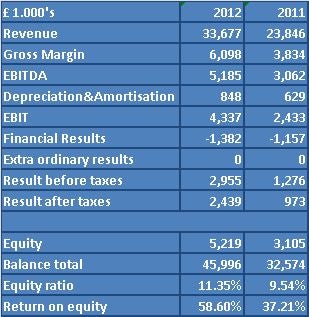 TITAN Containers has recently released its financial report for 2012, which shows the company achieved business growth of close to 50% compared with the previous year. This achievement completes the 2012 target of 100% growth since January 2010.

During 2011, TITAN Containers made strategic decisions to enter new markets and to develop existing markets. To a large extent these strategies were realised during 2012.

As the strategies mature and new growth targeted for 2013 becomes a reality, it is expected that TITAN’s performance will continue to flourish despite the negative and adverse general economic climate.

The key financial figures shown in the picture are converted at a typical £/DKK rate of exchange as per 27 May 2013.

An official copy of 2012 accounts will be supplied, to relevant applicants, on request to TITAN’s CEO by emailing JLB@TCmail.eu

All You Need to Know About Container Hire and Rental

TITAN maintains 'ready to go stocks' of cargo worthy 20in and 40in standard containers in almost all major locations.

Manufactured in accordance with DN2.7-1/EN 12079 these 10in refrigerated containers are designed and built with the user safety, reliability, performance and running costs in focus.

Titan ArcticStore formed to provide high-quality, environmentally friendly frozen and chilled portable coldstores primarily for the domestic market, but also for the off shore oil...