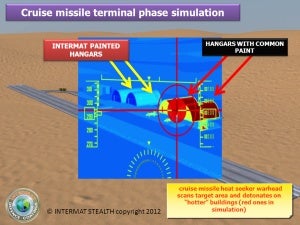 In most cases an attacker already knows a friendly force’s installations and facilities grid coordinates. Especially, knows the grid coordinates of the facilities that do have an impact to community or industry/economic establishment, such as oil and water tanks, pipelines or strategic weapons sites.

Of course, enemy’s intelligence is able to pinpoint strategic targets of pure military interest such as hangars/shelters, HQ’s, military facilities. Practically, no location may be considered secure, secret or safe.

No Air Defense Systems – no matter how complicated they may be – is absolutely safe. ECM capabilities of modern warfare, multiple (salvo) missile launching that "floods" friendly radars and devices, gaps in radar coverage or even failures in Air-Defense System components may allow a percentage of missiles penetrated friendly protection "umbrella".

Countries within medium to higher level of missile technology portfolio, lacking of high-end intelligence resources and especially geo-intelligence, are able to use "salvo" strategy as a weapon of choice.

Provided that one or more missiles succeed in penetrating the Air Defense "umbrella" their "Go-Onto-Location-in-Space (GOLIS) guidance systems", which is broadly used in missile technology for fixed/stationary targets and may be either Inertial (INS), GPS, or even more complicated (for example Terrestrial system including photographic or topographic reccon), are shifting during the terminal phase of trajectory to Infrared Homing (the most common practice) above the target area in order to perform the final approach stage of the track/trajectory and achieve a warhead event (explosion) on the most "hot" target within target area.

Intermat’s coatings act as a "last resort" countermeasure for that particular phase of the missile’s track/trajectory (the Infrared Homing phase) since all other systems have failed to keep missile away from target area. Intermat’s coatings manage to keep "cooler" or similar to the ambient temperature the facilities that friendly forces have decided to hide and enhance in combination to friendly decoy plan the survivability rate of friendly installations.

For over 20 years working worldwide in the field of stealth technology coatings and materials for military applications.

For over 20 years working worldwide in the field of stealth technology coatings and materials for military applications. We specialise in the research, development, and...