Xplore's ultra and fully rugged tablet PCs have the strength, power and flexibility to complete military operations on land, in the air, or at sea. 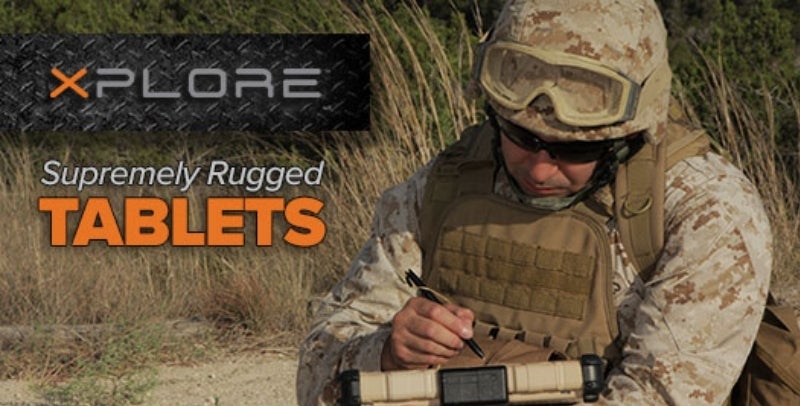 Xplore’s complete line of ultra-rugged and fully rugged tablet PCs have the strength, power and flexibility to complete any job the military issues on land, in the air, or at sea.

They are purposely built to withstand extreme / adverse battlefield environments, including those with low visibility and military combat vehicles.

Ultra-rugged tablets for military use

The Xplore XC6 M2 ultra-rugged military tablet is suitable for military forces' unique mobile computing requirements, including RE / CE-102 certification for front line and fixed-wing aircraft utilisation.
The Xplore XSLATE B10 sets a new standard in mobile computing as the most comprehensive, fully rugged Windows® tablet PC on the market.
Driven by Android™ 5.1 Lollipop and powered by Intel’s Atom™ CPU, Xplore’s bigger, stronger, and more secure Xplore XSLATE D10 fully rugged tablet is ideal for a wide range of workplace challenges.
Backed by a MIL-STD-810G rating, the Xplore Bobcat is a tough mobile computing platform packaged in a sleek design.
The Motion R12™ by Xplore Rugged Tablet PC is designed to support workers on the move. It is sleek, lightweight and features a variety of thoughtfully designed accessories.

We also understand that each organisation and mission requires a very unique set of communications, data, security, and systems features not easily fulfilled by consumer-grade devices or rugged laptops.

Equipped with hot swappable battery options, night-vision compatibility and a customisable ‘quiet mode’, you can be confident that Xplore’s field-upgradeable and repairable XC6 M2 rugged tablet will be able to see even the most complex operations through to completion.

Our rugged tablets are also ATEX and C1D2 / C1Z2 compliant for use in hazardous locations, and can withstand constant exposure to shock, vibration, humidity, and contaminating fluids that may be found in military operating environments.

The ability to act on real-time intelligence gives armed forces organisations an advantage during security operations.

However, traditional military computing and communications systems can’t reach very far in the field, and consumer-grade mobile devices can lead to data delays and mission failure.

Situational awareness and real-time data analysis is vital to troop safety and mission security, so the best way to mitigate such risks is to deploy one of Xplore’s XC6 ultra-rugged tablet PCs.

The company’s rugged tablets provide a mobile platform that is easy to mobilise on foot, mount in a military vehicle, or dock in an aircraft.

Xplore’s compatiblity with both Windows® and Android™ provide flexibility in deploying relevant military applications in mobile environments, and multiple I/O ports allow for direct connectivity to peripheral devices needed for fast diagnostics and maintenance of assets.

Xplore’s toughest mobile computers have the proven strength, endurance and power to serve and protect the critical work done daily within military organisations on the battlefield or at the supply depot.

Contact us today to learn how easy it is to deploy Xplore rugged tablet PCs for your military training, combat, and maintenance operations.