Fiji’s reconditioned armoured troop-carrying vehicles were acquired from Australia and are used by the RFMF for peacekeeping missions. Eight of these vehicles were deployed in the Middle East as part of the service’s annual rotation for a UN mission. The remaining vehicles were delivered to Fiji to be used as local assets.

Thales bought and installed the Barrett mobile radio systems in the vehicles and integrated them with the Thales Sotas Intercom system to provide a complete solution for the RFMF. The companies provided a one-week training course on the systems for 12 RFMF personnel when the vehicles arrived in Fiji.

“How it’s so easy to use, easy to interface with, that’s why it’s quite applicable for this type of operation.”

Mr Jackson highlighted the adaptability of the systems. “We’ve interfaced into another communications intercom system and the ease of interoperability between the two radio manufacturers is part of the simplicity of our radio equipment,” he says. “It’s so easy to use, easy to interface with, that’s why it’s quite applicable for this type of operation.

“The VHF is more for vehicle-to-vehicle or vehicle back to the direct base camp that they’ve deployed from,” Mr Jackson adds. “Once they get out of line-of-sight coverage, the low-band VHF, they have the option of using the HF.” 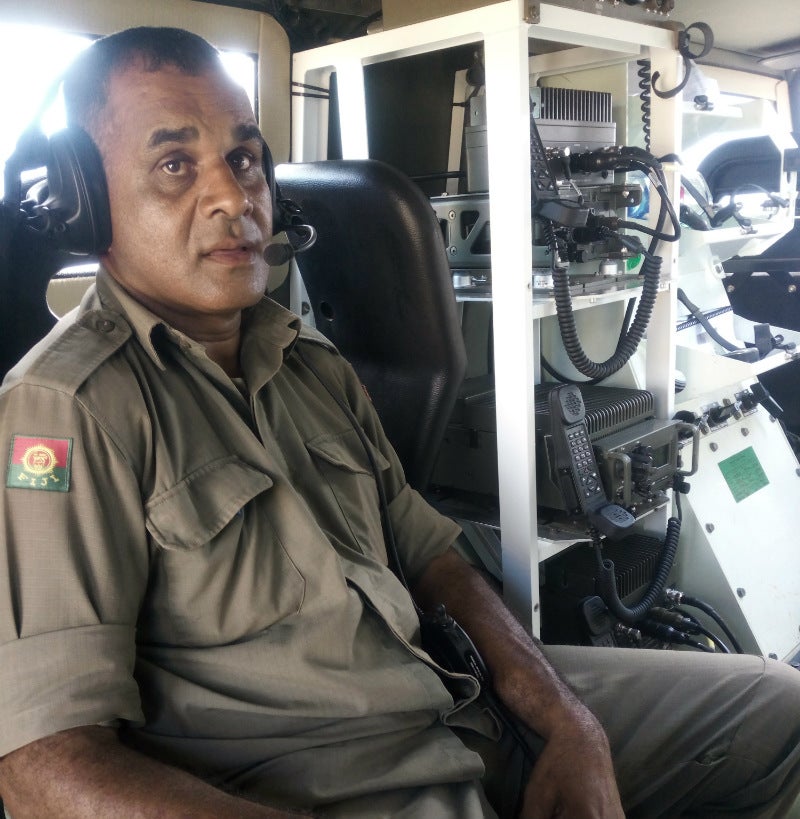 Barrett’s communication systems are widely used for peacekeeping missions and other military operations throughout the world.

“Because of the low-band VHF, they get greater coverage so when they’re doing troop movements or moving high-value targets around, the vehicles are provided with security and interfacing with our equipment and the low-band VHF technology that we use means that they can cover greater distances ,” he explains.

“The Fijian Military supplies troops to UN missions so part of that when the troops are deployed is being able to deploy with their own communications equipment.”

The Republic of Fiji Armed Forces has 3,500 active soldiers and 6,000 reservists. The service has three battalions that carry out peacekeeping missions, with two of them stationed abroad and one in the country’s capital Suva, as well as three battalions situated across the Fijian islands acting as the territorial force.

Barrett Communications has been providing communications equipment to the Fiji Military for a number of years. “For the last five years, they have been purchasing equipment from us and I’ve been over a couple of times and done training for them,” Mr Jackson says. “They’re using it for multiple roles.

By clicking the “Submit” button above, you accept and acknowledge that your data will be used as described in the Barrett Communications Privacy Policy.

We will also collect and use the information you provide for carefully considered and specific purposes, where we believe we have a legitimate interest in doing so, for example to send you communications about similar products and services we offer. We will always give you an option to opt out of any future communications from us. You can find out more about our legitimate interest activity in our privacy policy here. ‘We’ includes Verdict Media Limited and other GlobalData brands as detailed here.

14 Dec 2020
Registration is disabled.
We use cookies to ensure that we give you the best experience on our website. If you continue to use this site we will assume that you are happy with it.ContinueLearn more