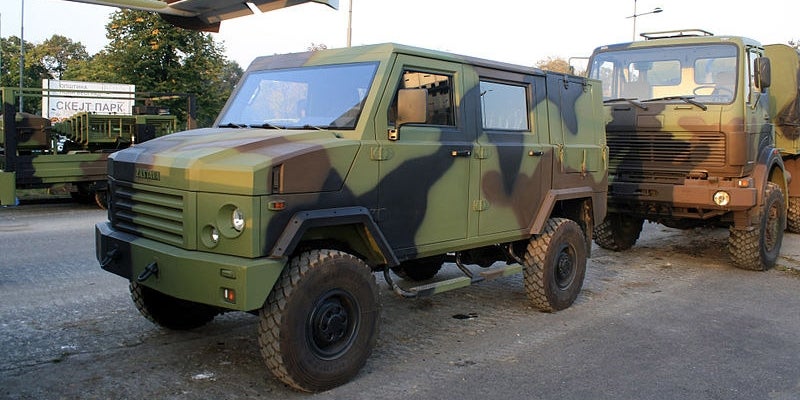 Zastava NTV (Novo Terensko Vozilo) 40.13 H is a 4×4 wheeled off-road military utility vehicle manufactured by Zastava Trucks for the Serbian Army. It is intended for the transportation of personnel and military equipment.

The vehicle is designed by Serbian military research and development institution Military Technical Institute (MTI) and produced at Zastava Trucks’ Kragujevac plant. It was unveiled in 2011 and is available in three configurations, namely SUV, extended cab, and van.

The extended cab variant was exhibited during the Partner 2015 International Fair of Armaments and Defence Equipment held in Belgrade, Serbia, in June 2015.

Designed to be lightweight, the off-road vehicle can carry three personnel, including a driver in SUV configuration. The extended cab variant features double cab structure, accommodating five personnel in addition to the driver. The seating capacity of the van configuration is nine members.

The Zastava NTV light utility vehicle is powered by a four-stroke, four-cylinder, water-cooled, 214kg Cummins ISF 2.8l turbocharged diesel engine equipped with an intake air cooler. The propulsion system is longitudinally mounted in the front of the cabin. It develops an output power between 80kW and 120kW and a torque between 280nm and 360nm.

The engine is compliant with Euro 3 / Euro 4 emission standard and is coupled with manual transmission system, consisting of a single-plate friction clutch and a ZF 5S 400 synchronous mechanical gearbox with five forward gears and one reverse gear.

The off-road vehicle is fitted with hydraulic servo-assisted steering and rigid front and rear drive axles with inter-axle differential locks. The brake system consists of service brakes on all wheels with disc brakes on the front and drums on the rear wheels, and mechanical parking brakes. It is equipped with anti-lock braking system (ABS) and electronic brakeforce distribution (EBD) systems for increased safety on varying terrain conditions.

"The extended cab variant was exhibited during the Partner 2015 International Fair of Armaments and Defence Equipment held in Belgrade, Serbia, in June 2015."

The Michelin XZL 255/100 R16 radial tubeless tires provide improved traction on all terrain conditions. The vehicle can be optionally fitted with run-flat tires.

The vehicle has a maximum speed of 110km/h and can operate over a distance of 600km. It has a ground clearance of 0.26m, and approach and departure angles of 35° each. It can negotiate longitudinal slopes of 60% and transverse slopes of 35%, and can ford at a depth of 0.7m in water.

The Zastava NTV is capable of operating on all terrain conditions.