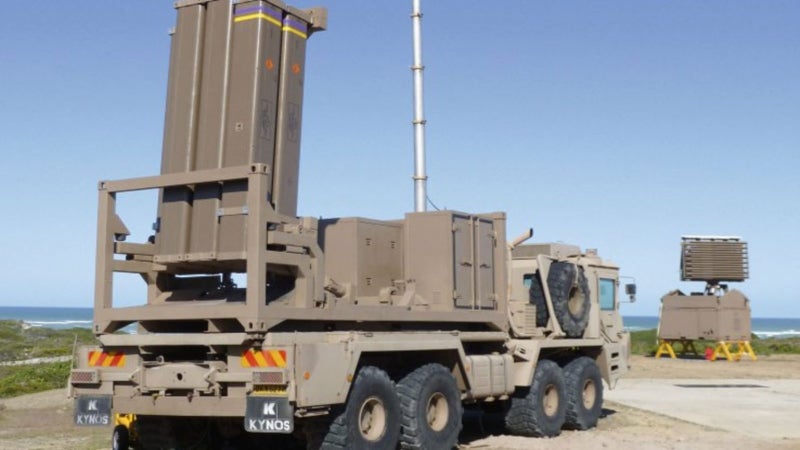 The missile system is intended to provide all-round protection for the armed forces against airborne threats, including attack aircraft, missiles and unmanned aerial vehicles (UAVs).

Denel Dynamics conducted the first test launch of the Umkhonto GBL system for the South African Army in October 2013. The GBL successfully fired three Umkhonto missiles during the test.

The naval variant of the Umkhonto missile system is operational with the navies of South Africa, Finland and Algeria.

The Umkhonto GBL vertical launching system is 6.05m-long, 2.43m-wide and 2m-high and can carry up to eight Umkhonto-R and Umkhonto-IR (Infrared) MkII missile rounds.

The launcher has an empty weight of 4,500kg and a full load weight of 7,100kg. It is transportable by air, land and sea using helicopter or military transport aircraft such as C130.

It can be installed in land-based or naval air defence systems or can be mounted on vehicles that are built to ISO 668 Lock and STANAG 2413 hook-lift standards.

The ground-based launcher system has vertical launch capability with 360° coverage and can also operate in surface attack mode.

The Umkhonto GBL vertical launching system is operated and controlled by the launch platform’s command and control centre through communication devices such as radio link, hard-wired or optical fibre.

Design and features of Umkhonto missile

The Umkhonto-IR MkII infrared-guided surface-to-air missile is a Block 2 version of Umkhonto SAM, while the Umkhonto-R is designed to offer an extended range over the Umkhonto Block 2.

“The missile system is intended to provide all-round protection for the armed forces against airborne threats, including attack aircraft, missiles and unmanned aerial vehicles (UAVs).”

The Umkhonto missile is fitted with four wings at mid-body section and four aerodynamic control fins in the rear. The tail section also incorporates a thrust vector control system, which enables the missile to manoeuvre at high altitudes.

The missile has a length of 3.32m, wingspan of 0.5m and a diameter of 0.18m. Weighing approximately 135kg, the weapon is equipped with a 23kg warhead. Coupled with a proximity fuze, the warhead provides high probability of kill against airborne threats.

The air defence missile is launched when a target is detected by a 3D target acquisition radar mounted on the launch vehicle. The weapon then flies autonomously towards the lock-on point using the on-board inertial navigation system during the mid-course flight.

An infrared seeker is mounted in the nose cone of the missile and acquires the selected target while locking onto it.

The tail-mounted command uplink receiver and antennae receive target information from the launch platform during the flight.

Each missile can engage up to four targets simultaneously, has a maximum speed of Mach 2 and can travel up to 8km in 18 seconds.