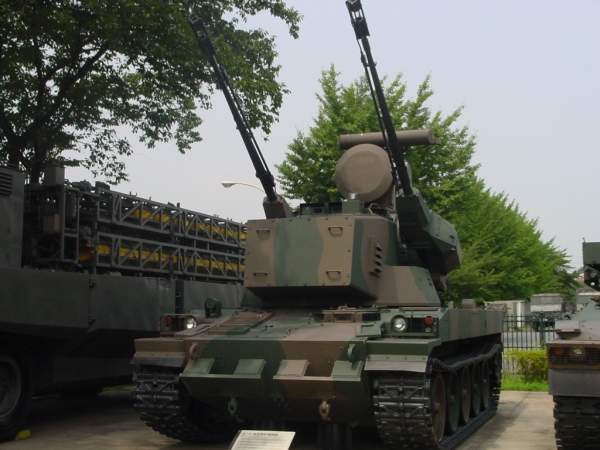 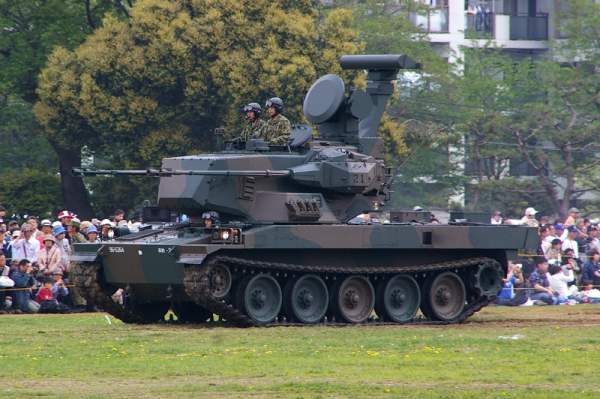 The SPAAG is based on the modified chassis of the Type 74 main battle tank. Image courtesy of Los688. 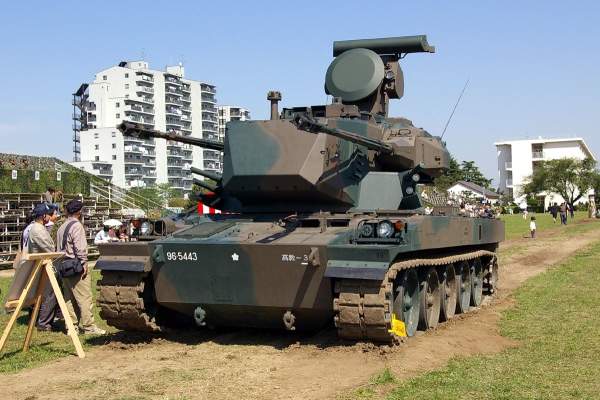 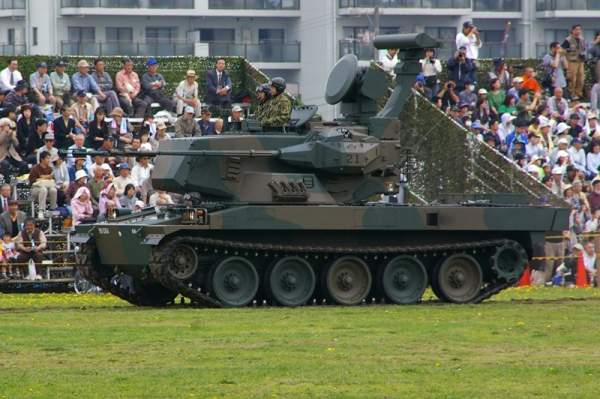 The development of the Type 87 was conceptualised by the Japan Self-Defence Forces (JSDF) in order to find a replacement for the US built M42 Duster SPAAGs.

The Japanese Defence Agency issued the requirements for the production of a domestic SPAAG unit and contracted Mitsubishi Heavy Industries to produce the new SPAAG system.

Full-scale engineering of the Type 87 SPAAG system began in 1982 and the first prototype was manufactured in 1983. Mitsubishi Heavy Industries provided the chassis while Japan Steel Works supplied the cannon system for the vehicle.

The Type 87 SPAAG was built on the modified chassis of the Type 74 main battle tank. It is 7.9m long, 3.18m wide and 4.4m high. It features a new turret housing Oerlikon 35mm twin cannon system.

The flat box mounted on the left side of the tracking radar houses a laser range-finder, optical tracker and possibly a low light level television.

The vehicle is also attached with two large radio antennas to the rear of the turret. Other equipment includes a turret mounted laser warning device.

The Type 87 is fitted with fully-stabilised twin Oerlikon Contraves 35mm KDA cannon. These guns were license-built in Japan.

The cannon can engage air targets within a range of 4km. The gun has a muzzle velocity of 1,175m/s with high explosive incendiary (HEI) rounds. Type 87 can strike the targets accurately on the move.

The vehicle has three periscopes mounted forward of the driver’s hatch cover. It is also fitted with surveillance and tracking radars and a friend-or-foe identification system.

"The development of the Type 87 was conceptualised by the Japan Self-Defence Forces (JSDF)."

The armoured hull of the Type 87 protects the crew from heavy machine guns and artillery shell splinters. Front arc can defend the fire from small bore cannons.

The vehicle is also fitted with NBC (nuclear, biological and chemical) protection equipment and automatic fire suppression systems. Either side of the vehicle is fitted with smoke grenade dischargers to prevent detection by enemy.

The Type 87 SPAAG is powered by Mitsubishi 10ZF Type 22 ten-cylinder air-cooled diesel engine delivering a power of 750hp. The engine and transmission are housed in the rear portion of the vehicle. The vehicle has a power-to-weight ratio of 17hp/t. The engine provides a maximum speed of 53km/h and a range of 300km.

The vehicle is equipped with hydropneumatic suspension which can be adjusted according to the type of terrain. There are five dual rubber-tyred road wheels on each side.

The drive sprocket is located at the rear and the idler at the front. The vehicle can traverse a 60% gradient and side slope of up to 30%. It can cross a trench of 2.7m and ford a depth of 1m.