Expand
The Terrier was manufactured by BAE Systems for the British Army.
The Terrier features a multi-purpose high-capacity bucket.
Under normal conditions, a crew of two can control the Terrier. 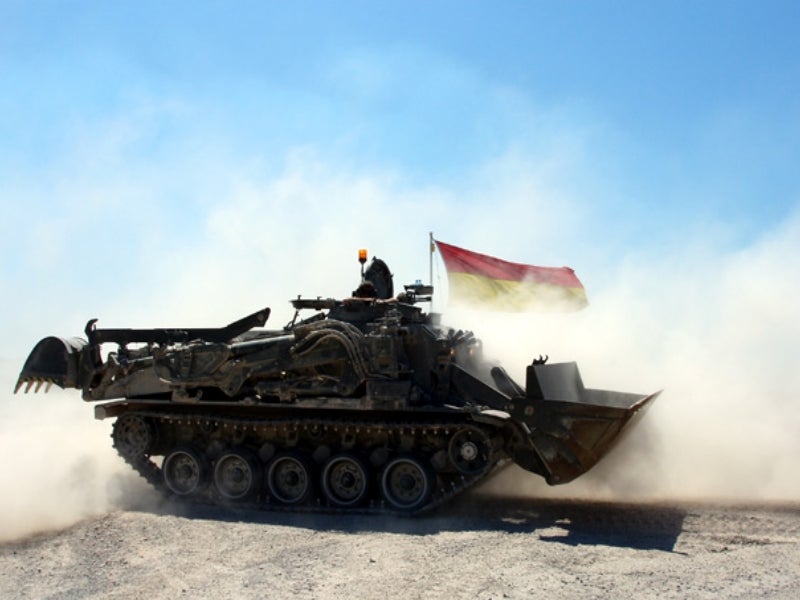 The Terrier is an air-transportable, light armoured vehicle designed and manufactured by BAE Systems for the British Army. The vehicle removes obstacles and mines for frontline troops, dig pits, and clear and maintain routes in conflict zones.

The prototype was unveiled in May 2005 and the first vehicle was delivered to the British Army in June 2013. The Terrier replaced the FV180 combat engineer tractor, previously operated by the Royal Engineers.

The Terrier weighs 30,000kg and can be air-transported by a C-17 Globemaster III or Airbus A400M. It can be operated automatically by remote control and radio link up to 1,000m. Under normal conditions, a crew of two can control the vehicle.

The crew are trained in a Terrier mission crew trainer (MCT), manufactured by BAE Systems Integrated System Technologies. A driver and commander operate the vehicle. Four MCTs were developed for the British Army.

The Terrier features a multipurpose high-capacity bucket fitted on the front for removing obstacles and a ripper for breaking road surfaces.

In July 2002, a £350m contract was awarded to BAE Systems by the UK Ministry of Defence to design and manufacture 60 next-generation terrier engineer vehicles for the British Army. BAE Systems also provides logistics support as part of the contract.

BAE Systems built four demonstrator vehicles by for trials. Tests were successfully conducted for two months in 2009. These tests were to perform battlefield missions such as digging 135 pits for warrior infantry fighting vehicles, 39 pits for self-propelled Howitzers, transferring 15,500t of spoil and travelling 3,300km on road and track.

Construction of the hull began in January 2010. The company has invested £2m in technology and equipment for supporting production. The hull underwent mine blast testing during missions in Iraq and Afghanistan to enhance the protection level of the vehicle. The construction of the hull structure was completed by end of 2010. Assembling and testing of the maiden vehicle began in 2011.

“The Terrier is fitted with a 7.62mm general purpose machine gun.”

BAE awarded a multimillion pound contract to Caterpillar Defence Products in October 2003 to provide six power packs for the prototype and demonstrator phase of the Terrier.

The assembled hull was delivered to BAE in 2004. Corus also designed and developed bespoke jigs and fixtures. Movable titanium arm coordinate measuring machines were used to manufacture the hull.

The Terrier is fitted with a 7.62mm general purpose machine gun while electric smoke grenade launchers provide 360° coverage. A weapon’s station is fitted along with smoke dischargers.

The steel hull protects the Terrier’s crew from small arm fires and shell splinters. The double-skinned floor protects the vehicle’s underside from mines. Additional arms or weapons can be fitted based on evolving threats. A suite of defensive aids with magnetic signature duplicators is also installed.