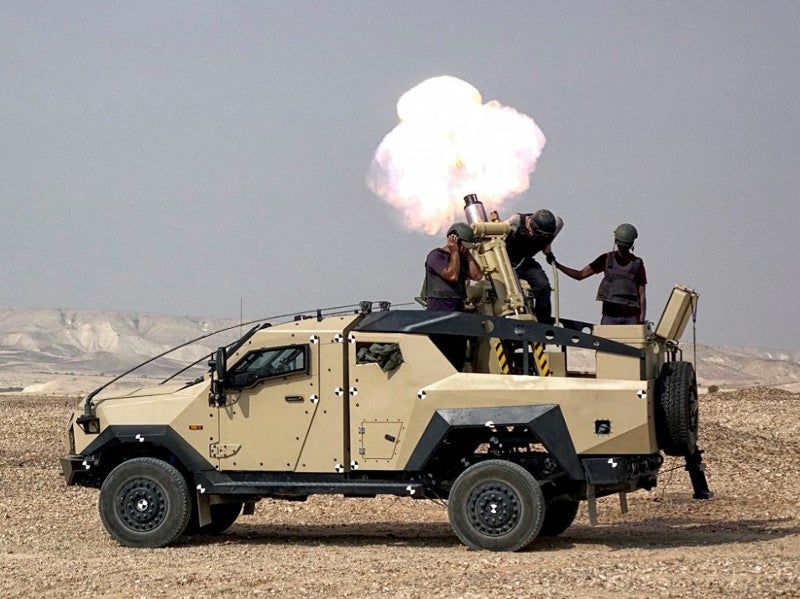 SPEAR MK2 is a fully autonomous, soft-recoil 120mm mortar based on a 4×4 light wheeled armoured vehicle. The mortar system was developed by Elbit Systems to support the rapid engagement operations conducted by armed forces.

The mortar system was unveiled to the public at the International Land Warfare and Logistics Conference in May. It was also on display for the first time at the 2017 Defence and Security Equipment International (DSEI) exhibition held in September.

The SPEAR MK2 is a modernised version of the battle-proven Spear mortar system. The modular mortar system allows for the integration of command and control systems for autonomous operation. The system features a longer barrel and offers a high recoil reduction capability compared to its predecessor.

The mortar system is suitable for installation on a range of lightweight armoured vehicles to achieve high agility and mobility. It has a weight of 200kg without the automatic loading system. The system can be mounted on HMMWVs, jeeps and other rapidly deployed wheeled vehicles.

The 120mm mortar is equipped with a high-performance enhanced tactical computer (ETC) and a SmarTMR tactical multimedia router and application server. The SmarTMR system can be integrated with onboard sensors, weapons, and command, control, communications, computers and intelligence (C4I) systems.

The mortar system can be integrated with a range of combat management systems to perform weapon control, threat evaluation, fire plan scheduling, target prioritisation and engagement, as well as monitoring of personnel assignments.

The onboard sensors transmit the targeting data to the fire control system (FCS). The FCS analyses the ballistic data and commands the electric drive system to point the mortar barrel to the particular azimuth and elevation angles. Feedback is delivered to the mortar fire control system through a GPS-based north finding system and inclinometer.

The mortar system can be operated in autonomous or manual modes by just two or three crew members. The mortar bombs are loaded into the system by an automatic loader. The deployment and launch procedure of the system can be completed within 60 seconds.

“The mortar system was unveiled to the public at the International Land Warfare and Logistics Conference in May.”

The superior tactical mobility and survivability of the SPEAR MK2 mortar system makes it an ideal platform for shoot-and-scoot missions.

The mortar system can operate independently with frontline observers or deployed troops. It can conduct independent missions as a standalone platform or can be part of an artillery battery or a platoon.

The SPEAR MK2 system has a rate of fire of 15 rounds a minute. It can engage targets at a maximum range of 10km, using standard ammunition. The circular error probability (CEP) of the weapon is 30m.

The system can fire a range of mortar shells, including NATO-standard 120mm mortar ammunition, as well as M48 Series, M98 Series and M100 Series of mortar bombs produced by Elbit Systems.