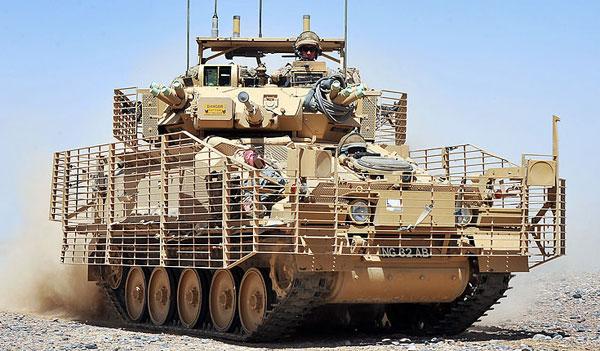 Scimitar Mark (Mk) 2 is a modernised version of the Scimitar armoured reconnaissance vehicle designed and manufactured by Alvis (now BAE Systems). The upgraded vehicle is in service with the British Army.

The Scimitar Mk2 light reconnaissance vehicle offers increased fire-power and enhanced mobility at reduced lifecycle costs. It is one of the members in the combat vehicle reconnaissance-tracked (CVR(T)) family of light-tracked vehicles.

The first upgraded Scimitar Mk2 vehicles were delivered as part of an urgent operational requirement programme to the British Army, for deployment in Afghanistan, in September 2011.

Development and modernisation of Scimitar Mk2

The first CVR(T) prototype was delivered to the UK Ministry of Defence (MoD) in 1969, with the British Army accepting the CVR(T) family of vehicles and awarding a production contract in 1970. The UK MoD received a total of 1,863 vehicles by 1986 and more than 3,500 vehicles were delivered to global customers by 1996. BAE Systems delivered a life extension programme to extend the life of the CVR(T) vehicles operated by the Royal Army of Oman in 2002.

In 2008, the UK MoD initiated an environmental mitigation programme to upgrade more than 100 CVR(T) vehicles for use in operations in Afghanistan. The programme was delivered by BAE Systems in 2009.

The CVR(T) Mk2 programme was initiated by the UK MOD to improve capabilities of the CVR(T) vehicles, in 2010. The modernisation contract was awarded to BAE Systems in December 2010, and development was carried out by the company’s vehicles military and technical services team at Telford site in collaboration with Defence Support Group (DSG) Donnington. A total of 50 CVR(T) vehicles were being modernised to Mk2 standard.

In April 2013, Safety Devices International delivered roll over protection structure to BAE Systems. The solution offers protection for the commander and gunner of the Scimitar Mk2 CVR(T) vehicle.

The modernised Scimitar Mk2 vehicle incorporates a new aluminium hull design based on Spartan armoured personnel carrier’s hull. The design provides for additional headroom for driver, allowing integration of blast attenuation seat. External parts are covered with anti-corrosion protective coatings to enhance corrosion-resistance. The vehicle has superior mobility and high reliability and can operate under a variety of environmental conditions during day and night. It has a maximum combat weight of 12,250kg.

The reconnaissance vehicle accommodates a crew of three members in new seating that hangs from the roof. Seats are protected from mine blasts and the increased space envelope of the vehicle provides comfortable working conditions for crew. The driver is provided with night-vision system for increased situational awareness.

An enhanced radio power management system, consisting of a rotary-based joint and up-rated alternator, is fitted to provide power solutions between chassis and turret.

The Scimitar Mk2 light armoured reconnaissance vehicle is installed with a remote weapon station and optional powered turret solutions for improved lethality. The vehicle can more effectively engage all types of enemy targets.

The main armament mounted on the turret is a 30mm L21 Rarden cannon which can fire 90 rounds a minute. A coaxially mounted 7.62mm general purpose machine gun is mounted as the secondary armament. Either side of the turret is also fitted with four 66mm smoke grenade dischargers.

"The hull and turret are fitted with enhanced mine blast-protection and electronic countermeasures for protection against iIEDs."

The Scimitar Mk2 is equipped with Plasan ceramic ballistic armour for increased protection against Kinetic Energy (KE) threats. Bar armour is also fitted to the hull for protection against Rocket Propelled Grenade (RPG) attacks and the fuel tanks are protected from blasts.

The hull and turret are fitted with enhanced mine blast-protection and electronic countermeasures for protection against improvised explosive devices (IEDs).

Engine and mobility of the armoured reconnaissance vehicle

A maximum speed of 80km/h on roads and increased range are achieved by the reconnaissance vehicle.

BAE Systems is also modernising Spartan, Samson, Sultan and Samaritan vehicles to Mk2-standard at a total cost of less than £30m for the British Army.