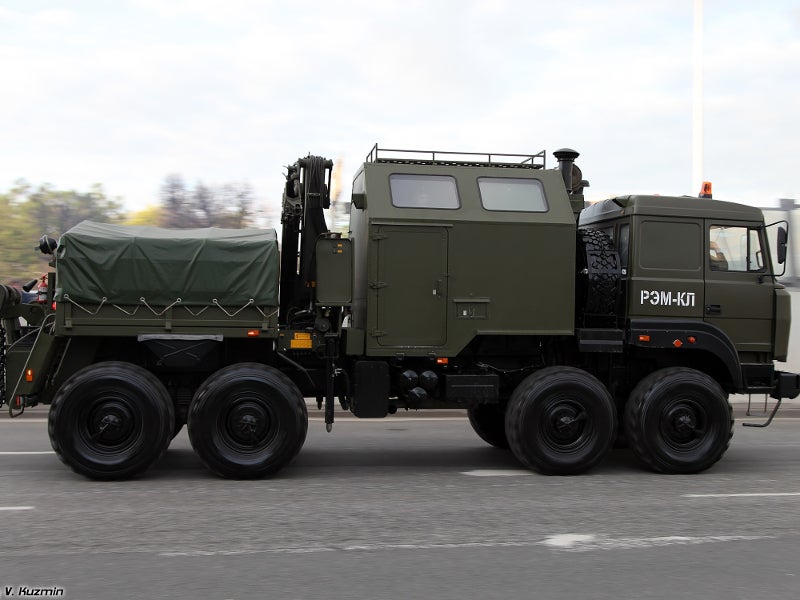 The REM-KL repair-and-recovery vehicle is designed and manufactured by Proekt-Technika, a company based in Russia.

Currently in service with the Russian Army, the vehicle enables troops to perform field repairs, towing, winching and recovery of stuck or damaged vehicles, light-armoured vehicles, tanks, weapons and other military equipment. It can also be used to transport personnel and cargo on all road conditions.

The Eastern Military District of the Armed Forces of the Russian Federation received the first batch of REM-KL repair-and-recovery vehicles in October 2016.

The kerb and operating weights of the vehicle are respectively 20,000kg and 25,000kg. With a payload capacity of 15,000kg, the vehicle can transport various loads such as spare engines and vehicle spare parts.

The vehicle is manned by a crew of three members, including commander, driver and handler. The all-metal cabin is located at the front above the engine compartment. The middle section houses crew compartment, while the rear section is equipped with cargo platform.

The crew compartment is outfitted with three ballistic glass windows for observation purposes.

The time required to prepare the vehicle for recovery operations is less than ten minutes, while it takes 12 minutes of preparation time for towing operations.

Repair and recovery capabilities of REM-KL

The REM-KL is provided with a towing device to pull damaged military vehicles and objects weighing up to 12,000kg on off-road conditions and 22,000kg on paved roads. The tow rope has a length of 60m.

A hydraulic winch is provided at the rear of the vehicle to support recovery operations. It has a traction force of 10.5t and a maximum pulling force of 20t.

The vehicle is also equipped with rigid and non-rigid hitches, as well as a variety of repair and evacuation kits.

The all-wheel drive vehicle is powered by a single YaMZ-238B four-stroke, V-type eight-cylinder, turbocharged diesel engine, which develops an output power of 300hp at a rate of 2,000rpm. The engine is coupled with an eight-speed manual transmission system.

A double suspension system and equaliser bars are installed on the front and rear wheels to control the vehicle.

The REM-KL recovery vehicle offers a maximum speed of 50km/h on paved road conditions and up to 30km/h on unpaved surfaces. It has a cruising range of 1,000km and a fording depth of 1.75m.

It can cross 1.2m-wide trenches and 0.55m-high vertical steps. The gradient and side slopes of the vehicle are 62% and 44% respectively.

The vehicle has the ability to operate in temperatures varying between -50°C and 50°C. It can withstand tropical climatic conditions ranging from -10°C to 60°C.