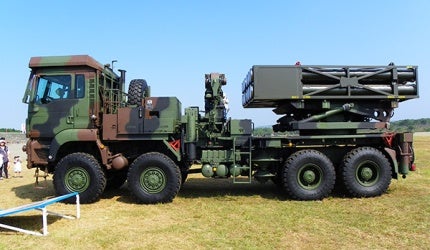 The Ray-Ting 2000 artillery launch rocket system was displayed for the first time during the Han Kuang Exercise in 1997. Series production of the system was delayed until 2000 due to structural problems in the launcher unit. The problems were resolved and testing was successfully completed by July 2003.

The Thunderbolt-2000 AMLRS is intended to launch missiles against enemy amphibious assault landing craft and other warships. The system also enhances the firepower of traditional tube artillery.

"The Thunderbolt-2000 AMLRS is intended to launch missiles against enemy amphibious assault landing craft and other warships."

The Taiwanese Army has a total requirement of about 150 Ray-Ting 2000 systems. It received its first Ray-Ting 2000 AMLRS from CSIST in September 2012.

Over 50 RT2000 systems are currently planned for production by the Republic of China Ministry of National Defence (MND) at a cost of $483m. All the units are deployed under the 21st Artillery Command and each artillery group is equipped with three Ray-Ting 200 batteries comprising 18 RT2000 launchers.

The Ray-Ting 2000 launcher, along with a self-reload crane, can be mounted to the rear side of a high mobility 8×8 cargo truck. The launcher can be equipped with pods of unguided surface-to-surface rockets. The design of sealed rocket pod ensures rapid reloading, and lowers the maintenance and storage requirements.

The fire-control panel is housed in the fully enclosed forward control cab which allows the crew to aim and launch rockets from within the cabin. The unit is equipped with electronic unit, position and direction determining system, controller box, servo motors, amplifier, and communications processor.

The fully automatic fire control system, and elevation and azimuth driven systems aboard the truck allow the operator to automatically aim and elevate launch tubes and compute firing data.

The RT2000 uses 27 rounds of Mk30 180mm rockets in three pods, with each pod housing nine rounds. The Mk30 can carry either M77 dual purpose improved conventional munitions (DPICM) bomblets or 8mm steel balls. The Mk30 has a maximum range of 30km.

The Mk45 rocket is larger than the Mk30 and carries 12 rounds in two pods. The 227mm rocket can carry either M77 bomblets or 8mm steel balls to a range of up to 45km. The Mk30 and Mk45 rockets can be equipped with high explosive or cluster warheads.

The Mk45 can destroy all small landing craft and damage large sized ships.

All three rocket-types in the Ray-Ting 2000 are powered by solid propellant motors. They are equipped with four fins for in-flight stabilisation. Each rocket can be equipped with a front-mounted warhead of high-explosive or sub-munition.

The rockets are fired from pods mounted in the launcher and the empty pods are replaced with a fresh pod using the crane on the vehicle. The rockets have a circular error probability of less than 1%.

The Mk45 can destroy all small landing craft and damage large sized ships."

The RT2000 is based on an Oshkosh M977 8×8 truck chassis. The vehicle is powered by a Detroit Diesel 8V92TA engine coupled to an automatic transmission. The engine, developing a power output of 450HP, provides a maximum speed of 100km/h and a range of 450km, and the wheeled vehicle improves the manoeuvrability of the system.