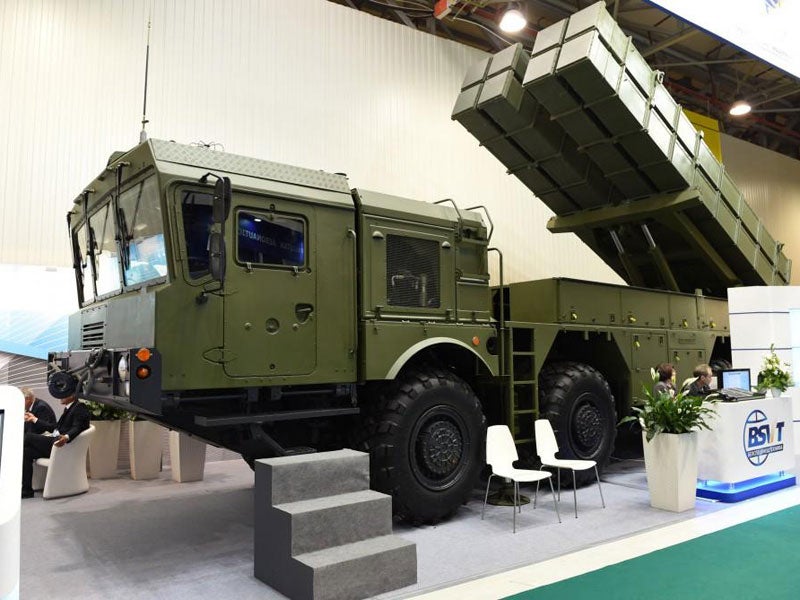 The Polonez MRLS can engage enemy personnel located in the open and in shelters, as well as unarmoured and armoured combat vehicles, special vehicles, command posts, artillery units, missile systems in addition to air defence missile systems and aircraft stationed at airfields.

The Polonez system was exhibited for the first time at Azerbaijan International Defence Industry Exhibition (ADEX) held in September.

The first live fire test of the Polonez MLRS was successfully conducted in Gomel Oblast in June. The system entered service with the 336th missile artillery brigade of the Belarusian Army in July.

The Polonez is based on the Volat MZKT-7930-300 heavy high-mobility chassis. The MLRS system constitutes a command post vehicle, a transloader, a launch vehicle, a technical maintenance vehicle, and an unmanned aerial vehicle (UAV) for target acquisition and damage assessment.

The MLRS is manned by a crew of three, including a commander, driver and an operator. The rockets can be fired either from the driver’s cab or from a remotely located vehicle with the help of a remote control unit. The transloader is mounted with a hydraulically controlled crane to load new rocket pods onto the launch platform.

The launcher can perform single or salvo firing and launch a full salvo of eight rockets within 50 seconds. Each rocket can be assigned an individual target to engage multiple targets simultaneously. The system can be deployed in eight minutes and redeployed in just two minutes to avoid counter-fire.

“The Polonez MRLS can engage enemy personnel located in the open and in shelters, as well as unarmoured and armoured combat vehicles, special vehicles, command posts, artillery units, missile systems in addition to air defence missile systems and aircraft stationed at airfields.”

The rocket integrates a global navigation satellite system (GNSS) / inertial navigation system (INS) guidance to deliver a high level of accuracy for engaging with long-range targets. It can engage targets within a distance between 50km and 200km with a high precision rate. The rocket can achieve a circular error probable (CEP) of 30m.

The transloader and the launch platform are based on the MZKT-7930-300 8×8 cross-country truck chassis. The MZKT-793000-300 is powered by YaMZ-846 turbocharged diesel engine, which produces a maximum power output of 500hp.

The full-time, all-wheel drive vehicle has a payload capacity of 24.2t and is equipped with a fully enclosed air-conditioned cab, housing a driver and two passengers.

The vehicle also features a power steering and a central tyre inflation system (CTIS). The maximum speed of the vehicle is 70km/h.

The superior cross-country mobility of the vehicle enables shoot-and-scoot missions.