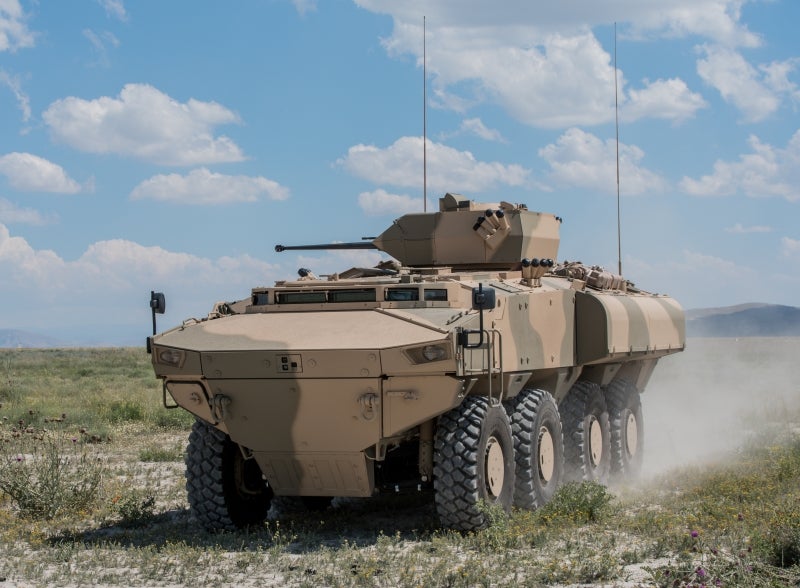 PARS III 8×8 range of wheeled armoured combat vehicle is being produced by FNSS Savunma Sistemleri to meet the modern military operational requirements. The vehicles are offered in 4×4, 6×6 and 8×8 configurations.

The PARS III 6×6 and 8×8 armoured vehicles were rolled out for the first time during the International Defence Industry Fair 2017 (IDEF 2017) held in May.

FNSS officially unveiled the first PARS III 8×8 armoured fighting variant built for the Armed Forces of Oman in July. FNSS will deliver a total of 172 Pars III 6×6 and 8×8 armoured vehicles to the Royal Army of Oman.

The unique layout of the vehicle houses a very large crew cab at the forward hull, engine in the centre, and troops compartment at the rear. The two-man driver’s cab in the front of the vehicle offers a 180° horizontal field of vision and a high level of driving safety and comfort.

The forward hull integrates five large panoramic periscopes for 180° forward vision. The forward and rear sections are also installed with two thermal cameras and three charge-coupled device (CCD) cameras to provide the driver and commander with a wide field of vision. The integrated air-conditioning system ensures an internal temperature of 25°C.

The PARS III measures more than 8m-long, 3m-wide and 2.4m-high and has a maximum combat weight of 30,000kg. It can accommodate up to 12 personnel, including a driver, a commander, a gunner and nine infantrymen.

The SABER turret integrates a M242 25mm dual-feed automatic cannon and a M240 7.62mm coaxial machine gun mounted to the left of the main armament. A bank of three 76mm grenade launchers is also installed on either side of the turret towards the rear.

The vehicle integrates an underbelly structure, base plates and mine-resistant seats to protect the crew from high-level mine threats and improvised explosive devices (IEDs).

The modular design allows for the integration of add-on armour to increase the level of protection to meet the requirements of the users.

The PARS III 8×8 is powered by a water-cooled diesel engine coupled to a fully automatic transmission with seven forward gears and one reverse gear. The power-pack provides a maximum road speed of up to 100km/h. The power for subsystems aboard the vehicle is supplied by an integrated auxiliary power unit.

The vehicle is equipped with a fully independent hydro-pneumatic suspension system, all-axle steering system, and anti-lock braking system. It offers the lowest turning radius in its class at 8m. The central tyre inflation system (CTIS) enables the driver to adjust the tyre pressure according to the terrain type.

The vehicle is also equipped with hydraulic service brakes and a parking brake. It has a maximum range exceeding 800km.

The PARS III 8×8 is capable of negotiating a 60% vertical and 30% horizontal gradient. It can climb vertical obstacles of 70cm high and cross trenches of 200cm wide. The approach and departure angles of the vehicle are 50° and 40° respectively. The vehicle can be transported by air by A400, C17 and C5 military transport aircraft.