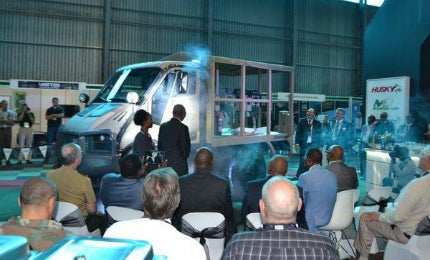 Oribi is a multi-role utility truck (MUT) designed and built by DCD Protected Mobility, a division of DCD Group, to meet next-generation military, security, and commercial vehicle needs. It was launched at the AAD Expo (Africa Aerospace & Defence Expo), held in September 2014 in South Africa.

The Oribi vehicle is an innovative outcome of a joint venture between DCD and South Africa-based medium-to-heavy duty vehicle customisation enterprise Histomart. The JV was formed in mid 2013.

The modular and customisable structure of Oribi can be configured into a troop carrier, mobile weapon platform, reconnaissance, command and control, cargo carrier, tanker with pump, ambulance, cargo carrier with crane, and a fire fighting vehicle.

The Oribi utility truck features a versatile design with a steel tubular space frame cabin, and is based on rugged 4×4 chassis. The high torsional rigidity allows carriage of heavy weights over rough terrain surfaces.

The vehicle has three different wheel-base length options: short, medium and long, as well as three different cab configurations: single-cab, double-cab, and open top. The medium-sized Oribi vehicle measures 4.88m long, 2.5m high and 2.05m wide, and has a wheel base of 3.1m. It has a kerb weight of 2,697kg and a gross vehicle weight of 6,000kg, and can carry payloads of up to 3,300kg.

Oribi can seat up to three crew in single cab configuration and six in double cab. The open top version is fitted with two seats.

The truck incorporates standardised off-the-shelf components to provide rugged and reliable performance in any terrain, even under extreme conditions. It is installed with a 12V system, 13 pole socket for trailer, 140A alternator, and a 55kW power take-off device. It can be recovered using front and rear tow points.

The cab is made of integral rollover bars and pressed steel body panels for protection from corrosive environments. It is provided with a bush protection kit including a bull bar to protect its personnel from collisions. The kit also includes window protection products, a snorkel, engine and transmission sump guards, shields around the fuel tank, and headlight covers.

Engine and drivetrain of Oribi

The power pack of the Oribi MUT consists of Iveco F1CE3481C four-cylinder turbo diesel engines, which generate up to 150kW of power and 500Nm of torque. The engine has a power-to-weight ratio of 25kW/t at gross vehicle weight. It is coupled to a ZF S-400 six-speed manual or Allison SP1000 5-speed automatic transmission system with low range and differential lock.

The vehicle features rigid-axle suspension, formed by parabolic leaf-springs and double-acting telescopic type shock-absorbers. It has a transfer case with low range and differential lock.

“The truck can travel at a maximum speed of 100km/h and offers a maximum range exceeding 600km. It can effectively traverse through uneven terrains such as deep sand, heavy mud and tar roads while carrying heavy loads.”

The wheels are fitted with 245/70R17.5 road tyres for a smoother drive on the road, or the 275/80R20 off-road tyres to offer better cross-country performance. The tyres can be optionally installed with run flat inserts.

The vehicle features a hydraulic dual circuit brake system with disc brakes on all four wheels, and a de-selectable anti-lock braking system (ABS).

The truck can travel at a maximum speed of 100km/h and offers a maximum range exceeding 600km. It can effectively traverse through uneven terrains such as deep sand, heavy mud and tar roads while carrying heavy loads.

The truck has a ground clearance of 295mm and can ford to a maximum depth of 900mm. Its front and rear approach angles are 48° and 44° respectively. It has a maximum summit angle of 35° and a maximum surmountable slope of 45°.