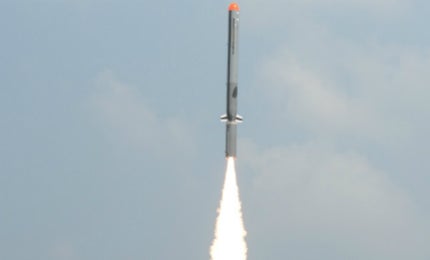 The missile partially met the mission objectives during its first test launch in March 2013 and fully achieved all of these targets during the second test flight. This second trial was carried out in October the same year at the Integrated Test Range (ITR) in Balasore, Odisha.

Nirbhay is expected to enter production by the end of 2014 and will be deployed by all three branches of the Indian defence forces.

A supersonic cruise missile being developed by BrahMos Aerospace.

The projectile is designed to deliver similar loitering capabilities, control and guidance, as well as the accuracy and stealth capabilities of America’s Tomahawk and Pakistan’s Babur missiles. Nirbhay is an addition to the Indian arsenal, which includes BrahMos, a short-range supersonic cruise missile jointly developed by India and Russia.

The first test-firing of Nirbhay was terminated midway after the missile deviated from the intended path. It was trialled a second time using a solid booster and a turbo-jet engine during the cruise phase.

It took more than one hour and ten minutes for the first flight test mission to be completed from lift-off to final splash down. The propulsion was initially provided by booster motor while the turbofan engine powered the further flight. Stabilisation was given by wings, which were unfolded by commands from the onboard computer.

The missile, carrying a dummy payload, reached a distance of 1,000km while maintaining accuracy of above 10m during its trajectory. The complete mission was tracked by indigenous telemetry stations and closely observed by an aircraft of the Indian Air Force.

"The missile has an operational range of approximately 1,000km and can cruise at a speed of Mach 0.8."

The weapon can carry warheads ranging between 300kg and 400kg. A total of 24 types of warheads can also be attached to the missile, based on the mission requirements

A highly advanced inertial navigation system, which was indigenously developed by Research Centre Imarat (RCI), guides the weapon. The missile can reach flight altitudes 500m and 4km above the ground and can also fly at very low levels to avoid detection by enemy radar.

Nirbhay has the capability to penetrate deep into the enemy territory and can engage targets with high-accuracy. It can also be launched from multiple platforms including aircraft, land-based vehicles/launchers, ships and submarines.

Nirbhay missile is launched from a LPTA 5252-12 x12 all-terrain and all-wheel drive mobile launch vehicle. This launcher was developed by Tata in close coordination with the Vehicles Research and Development Establishment (VRDE) at Vahannagar in

Power for the vehicle comes from a heavy duty engine mated to an automatic transmission. The launcher is also installed with anti-locking braking system (ABS) and central tyre inflation system (CTIS) for high-mobility.