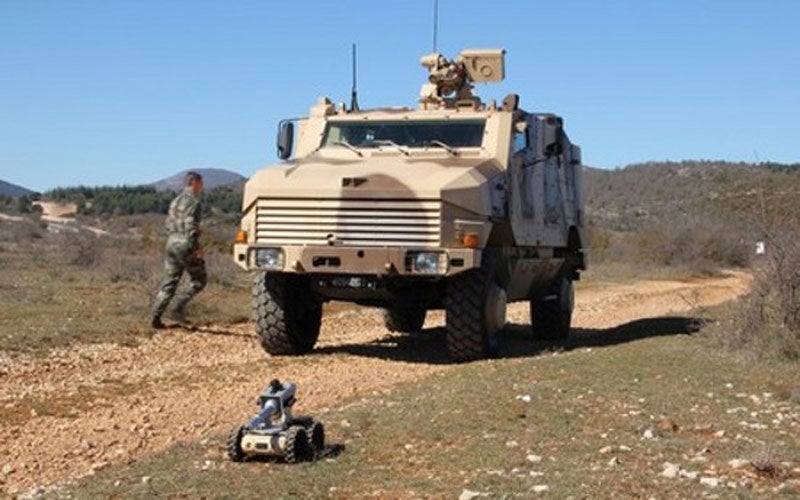 The robotic system was unveiled during the EuroSatory 2012 international defence and security industry trade show held in Paris, France, and launched at DSEI 2013 Defence and Security Equipment International exhibition held in London, UK, in September 2013.

NERVA LG is the first product in the Nexter Robotics line, which also consists of NERVA-S mini robot and NERVA-HD multi-mission robot.

The Defence Centre of Expertise for Soldier and Equipment in the Netherlands purchased the NERVA LG robotic system in 2014 for the Squad Level Unmanned Systems (SLUxS) project.

In 2014, Nexter Robotics sold more than 50 NERVA UGVs to its customers including GIGN (Groupe d’Intervention de la Gendarmerie Nationale) of the French Armed Forces, the Swiss police, Burma and the Dutch Army.

The UGV was tested by the Fire Services of Amsterdam in June 2015.

The easy-to-use and fully-waterproof NERVA LG unmanned ground vehicle is protected up to IP65 standard, with an option for IP67 class.

It can be fitted with either wheels or tracks, and its lightweight, open-architecture design allows carriage of different interchangeable payloads.

The robot has a length of 350mm, width of 310mm and height of 150mm, and weighs 4.5kg. It has the ability to withstand shocks, vibrations and temperatures up to MIL-STD-810 standard.

The UGV can be operated in both manual and semi-automatic modes. In the semi-automatic mode, the robot can autonomously navigate by traversing the pre-defined waypoints. The robot has the capability to return to home automatically when the mission is completed.

It is suitable for both indoor and outdoor operations and can be used by mounted and dismounted soldiers.

The NERVA LG robot can be fitted with up to 20 mission kits based on the operational requirements. A 360° vision, high-definition day camera mounted at the front provides panoramic view, local situation awareness (LSA) and under-vehicle reconnaissance.

“NERVA LG is the first product in the Nexter Robotics line, which also consists of NERVA-S mini robot and NERVA-HD multi-mission robot.”

It is compatible with payloads such as CBRN detectors, lighting system, exploration and self-mapping kits, anti-IED tool kit, non-lethal grenade, and smoke generator together with anti-intruder and position-marking devices.

The unmanned ground vehicle can be manually controlled by the operator from rugged personal computer or tablet or smart phones.

The NERVA LG robot can reach speeds up to 15km/h and has an endurance of two hours. Its operation time can be extended by installing an additional external battery. The UGV can climb stairs and traverse through obstacles. It is throwable and reversible up and downwards.

It can collect information across a distance of 1km in open terrain conditions and up to 300m in urban areas.